2019: more than 90% of Dutch fresh fruit exports were overseas product

April used to be a top month for Dutch fresh fruit and vegetable imports. In 2019, it was the month when 180,000 tons of fresh vegetables and 500,000 tons of fresh fruit were imported. In the recent past, May also saw about an equal amount of fresh vegetables being imported. Vegetable imports then decrease. They only reach similar April/May volumes in December again.

Usually, there is/was no problem supplying the domestic market. That is with fresh fruit and vegetables, year-round. Adding the import, of course, broadens the assortment. Until this year, two-thirds of Dutch fresh vegetable consumption consisted of locally cultivated product. This is much lower for fresh fruit.

Approximately 80% of local fresh fruit use is made up of import products. Dutch-grown fruit that is eaten consists mainly of apples and pears. An essential part of the fresh fruit market in the Netherlands is, therefore, dependent on import products. That is needed to expand the range. Three-quarters of this fruit comes from overseas. 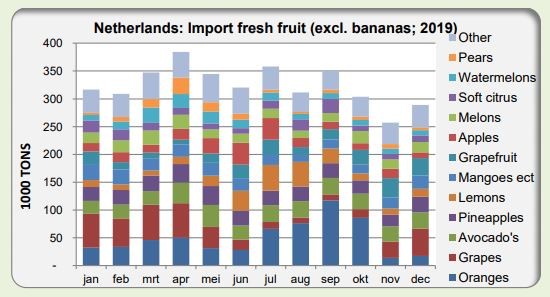 The Netherlands is a  transit country
There is now a looming question. To what extent will this overseas trade be conducted? It is vital for the Dutch fruit and vegetable sector. A vast amount - estimated at three-quarters - of Dutch vegetable production is usually sold overseas. Conversely, the Netherlands is a fresh fruit transit country par excellence. More than 90% of this product's export (in 2019, it was 3,95 million of 4,23 million tons) was from overseas. 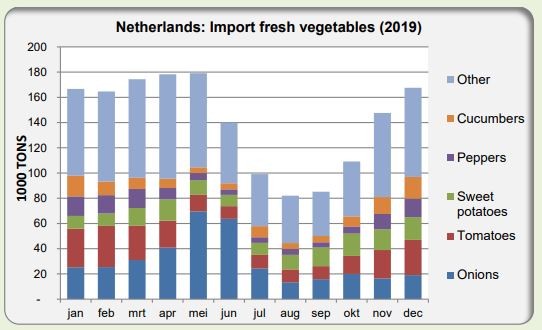 Oranges are the most import product the Netherlands imports from outside the EU. This is followed by grapes, avocados, pineapple, mangos, lemons, grapefruit, melons, mandarins, watermelons, and then apples and pears.

Most of these products imported by the Netherlands make their way further into Europe. The country's closest neighbors - Germany, Belgium, and France - are good for half of the total export. That will be further elaborated upon in subsequent analysis.

Most import products follow a fixed seasonal pattern
Each import product follows its own season. Countries used to supply these in those times. South Africa is the leading supplier of imported non-EU oranges to the Netherlands. This used to begin in July when the Egyptian season came to an end.

Grapes from outside the EU used to be imported from December to May. At the height of the season, these came mostly from South Africa, India, Peru, and Chile. The overseas apple import season used to run from May to July. Major products that the Netherlands used to import year-round are avocados, pineapple, and mangos.

Foreign suppliers often, more or less, followed up on each other. For example, Peru supplies avocados from May to August. Chilean avocados were mainly on the Dutch market from October to January. Then South Africa from April to September and Mexico from September until the end of the year. Costa Rica used to send pineapples year-round.

Brazil sends the most mangos from September to December. Then, from December to April, these fruits come mainly from Peru. And between May and August, various countries supply mangos. These are the Ivory Coast, Dominican Republic, Senegal, Puerto Rico, and Mali.