Online food trade in Germany has grown by more than 20% per year in recent years, but the market share has remained small. During the Corona (COVID-19) crisis, the added value of the online segment is widely recognised and online supermarkets can hardly cope with the increased demand. What characterises the German online food trade? And what standards must the products meet?

Rapid growth in still small market share
In 2019, online food sales accounted for less than 1% of total German food sales. Various players are attempting to grow into the rest of the market. The growing number of large and small online supermarkets grew by an average of 22% per year between 2014 and 2020. 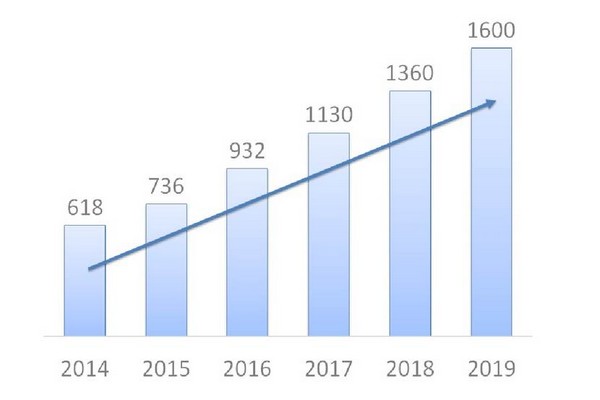 Sales growth in the German online food trade since 2014 (in millions of euros). On average, sales increased by 22% per year.

Trend breaker 2020: the corona crisis
The outbreak of the corona crisis in March 2020 led to an explosive increase in the demand for online supermarket services in Germany from February. The generally fairly conservative German consumer suddenly sought our online supermarkets en masse, who report that they can hardly cope with the increased demand. Picnic, mainly active in western Germany, had to hire 200 new employees to meet demand, and put 70,000 newly registered households on a waiting list. Market leader REWE reports delivery times of sometimes more than a month. Experts expect that this temporary situation will eventually lead to more acceptance of the online purchase of fresh food, also among older target groups, and expect the online behaviour of consumers to change forever.

A shopping cart full of supermarkets
As in the Netherlands, there are now many different large and small online supermarkets in Germany that are very different. For example, not every supermarket delivers throughout Germany or there is or is no minimum amount to spend. Some providers supply the same range online as that of their own physical supermarkets (eg REWE and Edeka), others deliver through a partnership with existing wholesalers (such as Getnow from Metro supplies). The Dutch Picnic, especially in the west of Germany, is entirely online and has its own purchasing and distribution, just like the successful Berlin Hellofresh, which supplies fresh fruit and vegetables in boxes worldwide from its own suppliers.

In addition to the large online supermarkets, there is a growing number of smaller providers who, often throughout Germany and by mail, serve specific market segments. Examples are the online supermarkets Veganz and Fooodz, which offer vegetarian and vegan products, and Gourmetfleish.de, which sends high-quality butcher cuts by parcel service.

In addition to new opportunities for foodstuffs themselves, this enormous growth in online supermarkets also offers opportunities for optimising the digital infrastructure. In Germany, people still use a lot of cash and people are more suspicious of digital payment options than in the Netherlands. There are also opportunities here in developing and improving good applications and / or web shops with reliable payment methods.

Laws and regulations
The same rules apply for online food sales as for sales in physical stores. The Bundesamt für Verbraucherschutz und Lebensmittelsicherheit (BVL) informs of the guidelines. Among other things, companies must register with the BVL and, like regular trade, are responsible for the quality, food security and traceability of the products. Furthermore, the labelling must be in German, there are strict hygiene rules and specific rules apply for the online sale of products.

Consumer is well protected in German e-Commerce
German consumers are also well protected in online commerce. There are many points of interest such as choice of law (Dutch or German) and the German right of withdrawal for online purchases, but there are also rules about the type of information that you can and cannot state in an online store. The General Terms and Conditions must be legally covering in detail. That is why we advise you to seek advice from specialised lawyers, which the German-Dutch Chamber of Commerce (DNHK) can help with, for example, and to cooperate with partners in Germany.