The frosts will not stop

The wave of night frosts that are affecting much of Italy goes on. In the north, the situation has reached an unprecedented level, with 8 hours below zero on the night of April 2 and minimum peaks of -6 °C. Even the anti-frost systems are struggling, because protecting an orchard with 5 °C below zero is not easy.

After three sleepless nights operating the anti-frost system, Davide Vernocchi, president of Apo Conerpo, is dispirited: "With these temperatures, this defense system is in crisis. We are talking about 5, 6 degrees below zero in some areas of the province of Ravenna. Apricots, peaches, plums, kiwis: in some cases, the damage is of 100%. There will be less work for everyone. Nature has cruelly solved one of our great concerns: the lack of manpower. Paradoxically, several farmers in the next few months will have to go looking for work somewhere else".

After the freeze on March 24, 2020, the phenological stage of the plants had advanced, exacerbating the damage of the recent cold nights. "In 1997, the situation was not as bad - adds Vernocchi - despite having been very serious. But here we are facing a 100% damage for some companies".

There is a lot of concern on the top fruit front as well. Albano Bergami of OI pear states that "in the Ferrara area, the most serious damages have been recorded on early varieties such as Santa Maria, Carmen and William. As for the Abate pear, it depends on the areas, on the temperatures reached, on the availability or not of the anti-frost systems and of water as well". 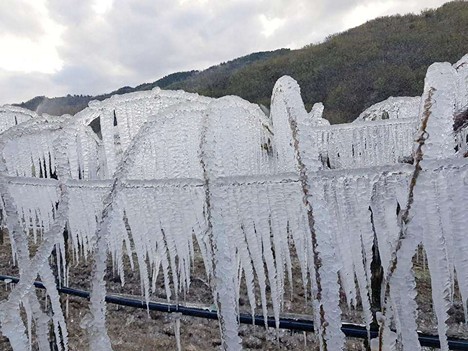 As for apples, the Fuji variety registered the biggest damages. In many cases there has been a loss of more than 50%. But Gala and Pink Lady have suffered as well.

"Unfortunately, in addition to the immediate damage - Bergami says - we will have to deal with the lack of fruit setting and future fruit drops. At the moment it is not possible to make an exact estimate of the total losses."