“During the hoarding week in Belgium, we had a huge increase in sales. We were barely supplied and had to run gigantic volumes. You can prepare in the week before Christmas, but no one saw this coming," says Bart Nemegheer of De Aardappelhoeve. “After the busy period, it stopped for a week and a half. It was super quiet, but now we see the demand picking up again. People have consumed everything they have hoarded and have to go back to the supermarket to get new products.” 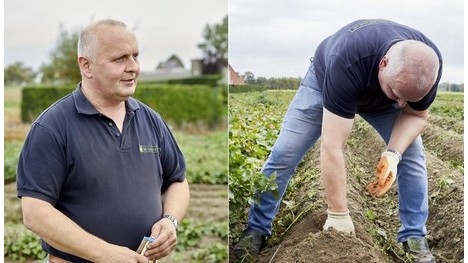 Although there are still enough table potatoes, Bart sees that the quality is deteriorating rapidly. “You see more and more silver scab and pressure bruises. Fortunately, the Spanish first potato season starts about three weeks earlier. Spain has had very good weather and new potatoes acreage has expanded 10% since last year. I expect some supermarkets to switch to new potatoes by Easter. Israel has also started and the first containers are coming our way. It is good that the imported potatoes are early, some examples, such as Charlotte, are as good as gone.”

The work at De Aardappelhoeve continues despite the Corona crisis. “Our employees are all still healthy and we have taken various measures to keep the virus at bay. Despite the fact that we can still work and live in this situation, we hope that it will be over soon.”