Frost in central and southern Italy:

For agriculture, it is an emergency within an emergency. Coronavirus was not enough: now there is a sharp drop in temperature - below zero, with frosts and snowfall out of season. There are significant damages to fruit and horticultural productions, which are in the delicate phase of flowering and budding, especially in Northern Italy (see FreshPlaza of 25/03/2020), but also in internal areas, and even in Puglia.

Puglia
The Coldiretti Puglia bulletin reports the sharp drop in temperatures down to -1°C, with the most serious situations recorded in the provinces of Bari, BAT and Foggia; in a region where up to 48 hours before 23°C was recorded, with serious repercussions on current crops. Bad weather does not in any way alleviate the drought problem, with 143 million meters of water in the Foggia reservoirs, according to the updated data of the Consorzio di Bonifica della Capitanata. 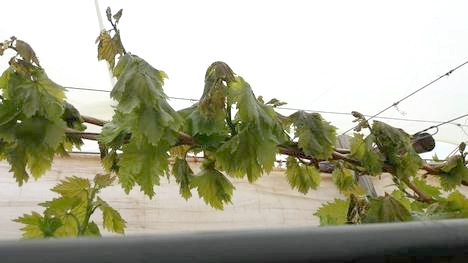 "In some areas of the region, the temperature last night dropped to -3°C. The vineyards near the coastal areas have not suffered significant damage, but we are mostly concerned about the crops in the internal areas", says Costantino Pirolo, an agronomist from Puglia. "Specifically, the early productions of Rutigliano, Noicattaro, Adelfia, both covered and uncovered, show damage from 20 to 80%. The most affected varieties are Superior Seedless and Victoria, all cultivars whose buds had reached 5cm". 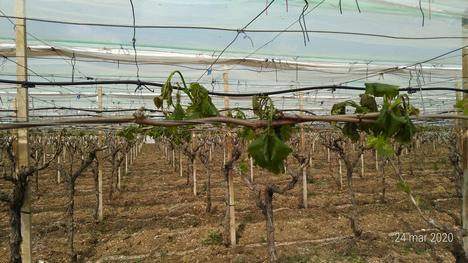 "Cherry and apricot trees have been damaged as well. For the early varieties, where the fruit was already visible - continues Pirolo - the first aesthetic damages can be seen (photo below), while for the late ones, it is necessary to wait a few days to have a better assessment". 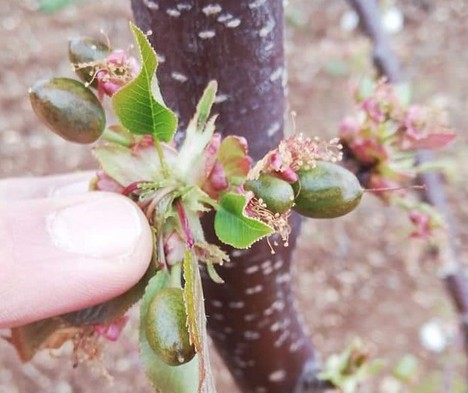 Cosimo Leggiero, sales manager of Ortofrutticola Egnathia of Monopoli (BA), says: "There will certainly be damages. We are closer to the sea and we will be less affected. There is concern for potatoes, courgettes, watermelons and for all the early transplants of the spring-summer crops. In the areas of Turi, Conversano, Casamassima, we are mostly concerned about cherries, apricots and peaches. The real damage will be seen in the next two days. As for the vegetables, let's wait to see what will happen to fennel and artichokes. Right now, there is a shortage of broccoli and skyrocketing prices for the cauliflower. Even the asparagus will suffer for 4 or 5 days because of the frost. As if we hadn't had enough problems already, after a bad winter". 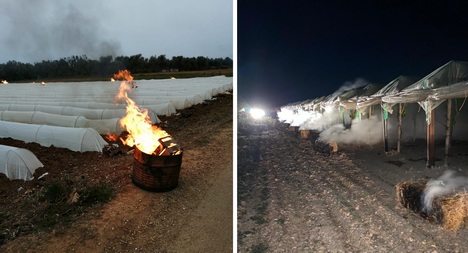 "Unfortunately, the situation is quite critical - says Giuseppe Bracone, coordinator of the company of the same name from Foggia - in addition to the frosts that have damaged crops such as artichokes and asparagus, there is also the sharp drop in sales of these two products, considered to by unnecessary by the customers, now forced since ten days to stay at home because of the Covid-19 emergency."

"2020 can be described as quite dry. From the beginning of the year in the province of Foggia, and on most of Puglia, it has almost never rained. During this period, farmers usually prepare for the future cultivation of tomatoes in the Capitanata, which might not take place because of the water shortage, because the low water level of the surrounding dams does not guarantee the supply for agricultural use". 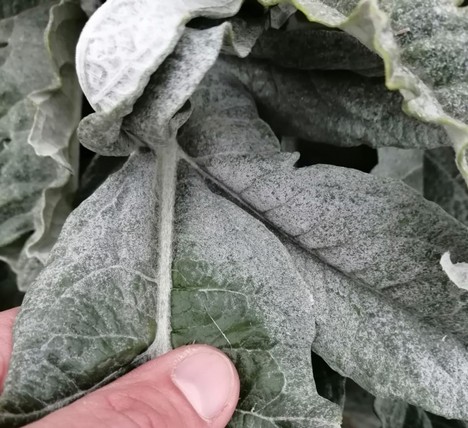 Pietro Losito, of the farm of the same name in San Giovanni Rotondo (FG), said: "Last night (between 24 and 25 March, ed) it was very scary. At least in the Foggia area, for the moment, table grapes have not been damaged; maybe the ones north of Foggia have been, but those are wine grapes. You have to wait a few days to see the effects of the drop in temperatures. The harvest of the asparagus already in production is compromised: they are practically frozen This product will be missing for a while, while for persimmons and stone fruit we have to wait".

Orazio Di Bari of the farm of the same name in Manfredonia (FG) confirms the negative situation for asparagus. "We hope this is a sporadic event and that the cold weather will go away as soon as possible. Fortunately the asparagus is not completely compromised and in a week we should return to normal, with the hope that the frost will not continue in the next few days".

Ignazio Tateo of the Tateo Group of Turi (BA), specialized in cherries, says: "I have spoken with my fellow farmers and, apparently, they have suffered significant frost damage. As for me, however, I have nothing to report, precisely because the flowering has not yet taken place, only the swelling of the buds is visible. This vegetative situation was caused by the adoption of agronomic techniques different from previous campaigns. In fact, this year I preferred to avoid not only the classic soil tillage, which usually stimulates heating, but nitrogen fertilization as well".

Campania
In the Caserta area temperatures between -1 and -2°C were recorded. Surely this event will have repercussions on fruit and vegetables. It is still too early to assess the damage on summer fruit and the estimates would not be very accurate, we will have to wait a few days.

Some operators of the summer fruit sector said: "The most serious damages will be seen on the cultivars that have blossomed already; this does not exclude negative repercussions for plants currently blossoming. The event will have negative impact on production, which will not be abundant". 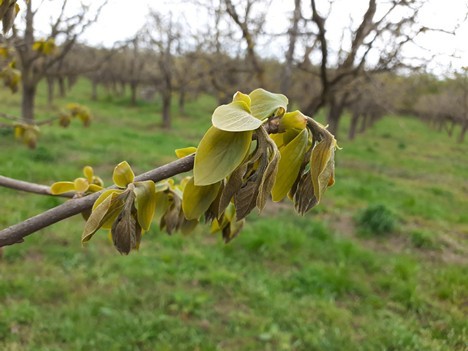 Persimmons as well were not spared yesterday's frost, March 25, 2020. Michele Capasso of Az. Agr. Verdicchio di Acerra (NA) explains: "It was not a simple "leopard spot" frost; I suffered damage up to 90%. The entire countryside of Acerra has been damaged. The vegetative restart is currently taking place: in this phase, persimmon trees are particularly vulnerable to freezing. Only vanilla persimmons have remained unscathed, because they sprout later than the other varieties. The severe damage done to the production invalidates all the work done so far. In fact, considering the 4,500 euros of fixed costs per hectare, if the quantities are less than expected, the whole campaign will be a disaster". 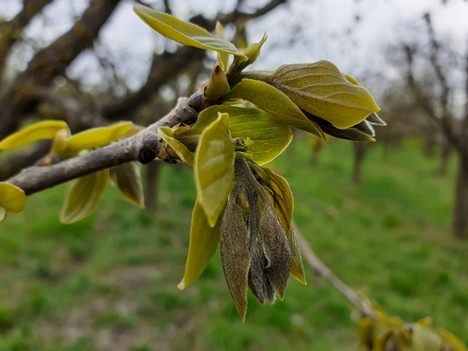 Mimma Divano, of the company of same name from Sessa Aurunca (CE), agrees on what happened and said: "For now it is premature to make an estimate. Surely from what can be seen we report at least 10% of the damages on the persimmon. In general, unfortunately, all fruit trees that have already sprouted or with buds ready will be affected". 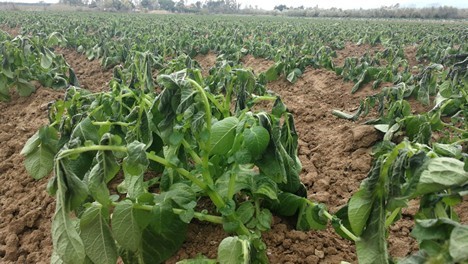 The situation is serious for vegetables both in the Caserta and the Neapolitan areas as well. "Potato producers are on their knees: hectares and hectares seriously affected by frost. This campaign is compromised: it will certainly not be as early and abundant as was hoped before the cold returns. Now we have to trust in the slightly more advantageous prices. Escarole, lettuce and chicory have also been severely affected by frost". So said the expert Davide Valletta. 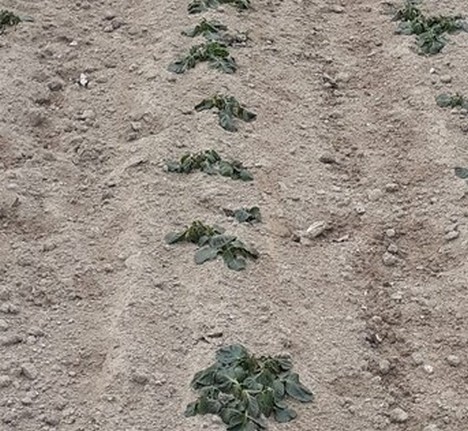 The situation in the Piana del Sele is different. Some operators stated that water mixed with snow is coming down, even at low altitudes, but they do not report any frost.

Producer Mario Peciarca of Aprilia (LT) explains: "Fortunately, my kiwis were unscathed, whereas I reported 100% damage to the plums and several of my friends had serious problems with the yellow kiwi; even someone who cultivated it under the anti-hail net protection, nevertheless reported 100% damage".

Campania and Basilicata
Antonio Genovese, chairman of the I Campi del Sole cooperative in Castrovillari (CS) and Natalino Gallo, chairman of the Op Agricor-Gallo della Piana di Sibari (CS), state that at the moment there are no frosts in the areas dedicated to stone fruit. "It's raining, the temperatures are slightly above zero. There is a possibility that there will be a frost, but we hope not". In the Sila area it snows heavily.

No frost damage at the moment in Basilicata. In the Metapontino area there has been rain, but not thunderstorms, and in the night (read between 24 and 25 March, ed) the temperatures ranged from -0.6 to 2-3°C. These numbers are certainly higher than in the Adriatic area. There is fear for some varieties of early apricots (such as Orange Rubies) and medium-late ones (such as Kioto and Farbela), because they are in full bloom.