State of the nation; overview of the UK’s strawberry industry

Soft fruit production in the UK is dominated by strawberries, blackcurrants and raspberries, which account for over 90% of cropping area. The rest includes blueberries and blackberries both of which continue to gain in popularity. In total around 9,400 hectares of lands is used for growing soft fruit. An estimated 85% of this is in polytunnels. This method increases the probability of a good crop and extends the UK growing season from 4-6 weeks to a much wider time frame of early spring to autumn. The remainder is grown under glass or uncovered.

The cost of labour for British strawberry growers
Labour costs typically account for 50% of the cost of production for growers. The majority of labour for both the growing and harvesting of these crops in the UK is employed on a seasonal basis, with the greatest need from May to September, when many workers typically work for a 20-25 week season during this period. In 2015 for example, over 28,000 seasonal workers were employed in the UK’s production of soft fruit.

Only a tiny fraction of this seasonal labour is provided by British nationals, with the majority of workers coming from the European Union. This is because, in the past, agricultural wages were higher in the UK than in Europe, and in particular Eastern Europe. According to John Pelham, author of the report The Impact of Brexit on the UK Soft Fruit Industry in June 2017, “without this imported EU labour… the growth in both the production and consumption of soft fruit in the UK over the last twenty years would not have been possible” .

However, with uncertainty over the impact of Brexit on freedom of movement, with currency fluctuations causing a weak pound against the Euro, and with growers across Europe competing for labour, Eastern European workers now find themselves in demand. Germany has just introduced tax incentives for foreign workers which may encourage Romanians, who have provided the majority of strawberry pickers in recent years, to turn their backs on British farms.

Nicholas Marston, chairman of trade body British Summer Fruits said in May 2019 that “ We’ve always competed with Germany but the UK has been more attractive – we have table-top, off-the-ground production. In Germany a lot of picking is done on your knees. A lot of the crop is not covered in Germany. If it rains, you don’t get any work so in the past the UK has been seen as a more attractive place to come. But now the competition for people right across Europe is hotting up”. 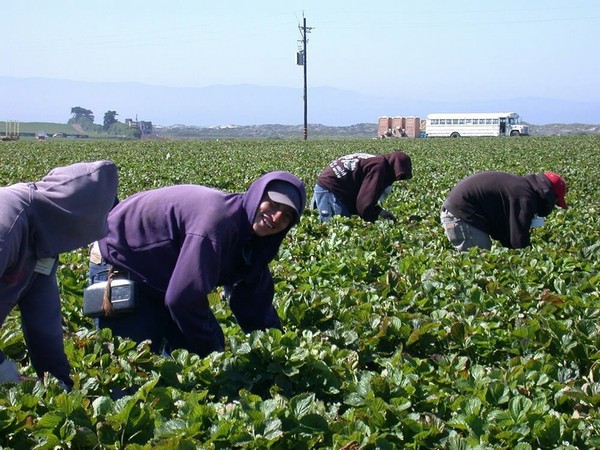 British strawberry growers look to increase productivity through innovation
Growers’ costs are increasing through inflation but the product value of strawberries, and the price, has remained static since 1996. With the added threat of higher wages needed to entice migrant workers to British farms, producers are being forced to look at other ways to boost productivity and therefore to lower their labour requirements per tonne of production.

Polytunnels have made huge differences to production in the last ten years, because not only do they protect the fruit from the vagaries of the British climate, but they also provide the means by which growers can adjust harvest timings and extend the availability of UK grown crops.

Polytunnel strawberry cultivation
The most important advance in productivity is the continuing conversion of strawberry production from soil (labour requirement per tonne of 140-180 hours) to substrate grown crops, such as peat, which provide a consistent and soil-borne disease-free environment and have a lower labour requirement (100-140 hours per tonne).

However, in response to consumer pressure and government policy about peat usage, the horticulture industry has invested heavily in finding ways to grow crops more sustainably in peat substitutes such as coir, bark, green compost and wood fibre. By 2015, 55% of the national crop was grown this way and it is estimated that by 2020, 80% will be grown in substrate.

Can robots replace humans in strawberry picking?
Robotic harvesting of strawberries is now in development as growers attempt to minimise the effects of labour shortages. Recent advances in visual sensor technology, machine learning and autonomous propulsion have brought the goals within reach.

A commercial strawberry picking robot was launched at Fruit Logistica in February 2019. The Belgian manufacturer, Octinion, claims the Rubion is the first commercial strawberry picking robot and can harvest around 1 fruit every 5 seconds. They argue they are achieving fast picking speeds by building the robot to replicate how people pick strawberries – by touching and snapping the fruit from the stem, not cutting it. The robot has been designed from scratch, which they believe makes their product very cost effective, and should be available to growers from January 2020. 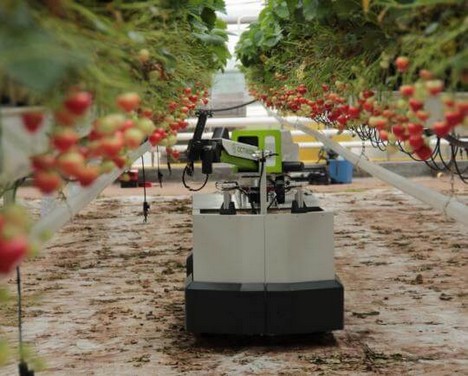 Strawberry picking robot
However, this robotic picker is only suitable for strawberries grown in substrate on table-top systems. Other manufacturers are taking a different approach. Cambridge-based company Dogtooth have created a picker which is based around robotic arms mounted on a mobile platform, like the Rubion, but this machine differs in one key area. Unlike the Rubion, Dogtooth’s machine will pick traditional British varieties in the field.

Amongst a number of AHDB-funded projects, a three-year PHD studentship project at Lincoln University is working to develop the vision systems required by a robot to decide which strawberries are ready to pick. The work takes inspiration from insects such as bees and fruit flies, which use visual cues invisible to humans and which tend to be overlooked by engineers. Students are using a specially developed camera to collect a novel image database of fruits and flowers at various stages of development and in different weather, lighting and protected conditions. Analysis of the results will provide a vision system to drive a robotic strawberry harvester.

Robotic picking will, however, only potentially replace 45% of all seasonal labour costs with the remaining 55% still needed for crop establishment, husbandry, management of overings and grading/packing.

Spotted wing drosophila (SWD) first appeared in the UK in August 2012. It is one of the most serious pests of thin-skinned fruits such as strawberries. Drosophila suzukii presents a real challenge to the UK soft fruit industry, as containment or eradication of this pest has so far proved difficult.

Flies on strawberry
Amongst a number of AHDB-funded projects, a four-year PHD project at the University of Greenwich is investigating new control methods for SWD. The research will optimise attractants and repellents and their deployment. Improved understanding of the insects’ sense of smell and searching behaviour will provide the basis for the development of a push/pull system.

Furthermore, recent research (2015-2018) under the joint leadership of the University of Southampton and NIAB EMR (a horticultural and agricultural research institute in East Malling, Kent) examined the behavioural and physiological rhythms of SWD as determined by its internal circadian clock and environmental cues. It revealed that DSW females are most active laying their eggs during the daytime, typically early afternoon, when the outside temperature reaches between 25-29.9 degrees C. This information now allows growers to time control sprays to coincide with the key egg-laying time.

Innovations in strawberry varieties
Until recently, the most popular strawberry in the UK was a Dutch variety called Elsanta. Resistant to disease and giving high, consistent yields, the breed was popular with growers. However, a belief amongst many consumers that Elsanta was rather bland led to growers and retailers looking for a suitable alternative.

According to Sainsbury’s category technical manager for fruit, Maddie Wilson, “The holy grail is finding something that is a grower’s dream: easy to plant, yields well, performs well in different weather and gets the right size of fruit, the plants last a long time, taste delicious and look lovely”.

Introduced in 2013, Malling Centenary was developed at the East Malling Breeding Club, based at NIAB EMR in Kent. The variety is now in demand from growers and major international retailers owing to its very high percentage of Class I fruit and reduced picking costs. It also scores highly in consumer taste trials with a richer, deeper flavour when compared with Elsanta.

“The rapid growth in Malling Centenary sales also reflects its outstanding performance on the supermarket shelf,” said Mario Caccamo, NIAB EMR’s managing director. “We recently passed total sales of 70 million plants and we can now confidently expect the variety to pass that figure [with] next year’s sales alone”.

Two new selections have been chosen for commercialisation and release to this industry in 2019. The June bearer is Malling Allure, a late Malling Centenary-type berry which has a similar season to Florence but with better fruit size, appearance and plant habit. The everbearer is Malling Champion, which as an early season production with a Class 1 yield and large fruit size. Initial assessments show resistance to key diseases such as crown rot.

The future of strawberries
It takes about seven years to go from a promising seedling to a commercial variety. Research projects on pest control tend to take between three and four years. Growers cannot expect overnight success with innovation. They can, however, expect that the industry as a whole is facing up to its challenges to ensure a consistent supply of delicious, disease-free and sustainably-grown strawberries to British consumers.