Panic buying grocery spurts resulted in photos of empty store shelves on social and mainstream media throughout the weekend. Where is all of this leaving the produce industry in the US and Canada?

Let’s start with the Greater Toronto Area (GTA), a region with a significant number of COVID-19 cases. “The panic buying is ridiculous. Anybody with experience is watching their inventory and they’re going to control their inventory accordingly,” says Michael Wilson of Toronto-based National Produce Marketing Inc. “I don’t foresee any major shortage in supplies.” In fact, in his own shopping, Wilson noted that items such as potatoes, cabbage and carrots were more cleared out than other fresh items.“The fresh greens were kind of left there and there was enough citrus,” he says, adding that it is March Break in the region which is a time the stores are generally emptier. “So, this is causing better than normal business for March Break.” 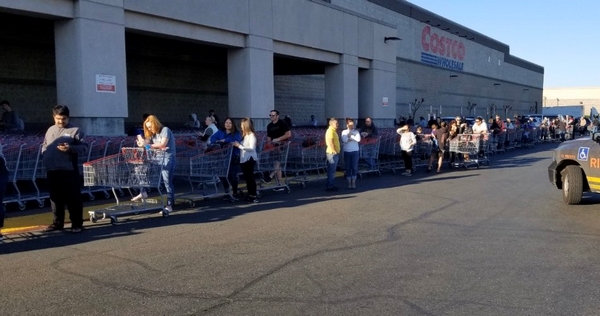 People waiting in line to enter a Costco store in Northern California.

Over at Catania Worldwide in Mississauga, Ont., Paul Catania saw a boost in demand for some very specific produce items. “There’s been a real focus on health I believe because our orders for lemons, limes and kiwi—all produce with high Vitamin C—have really picked up in the GTA,” says Catania. “In fact, it’s doubled, and in some cases more than doubled.” The push on those items started late last week and still continues. “We’re doing our best to fill the pipeline for everybody who has been working with us. I told my grower in Mexico this morning to grab every lime he could get and ship them,” he adds. 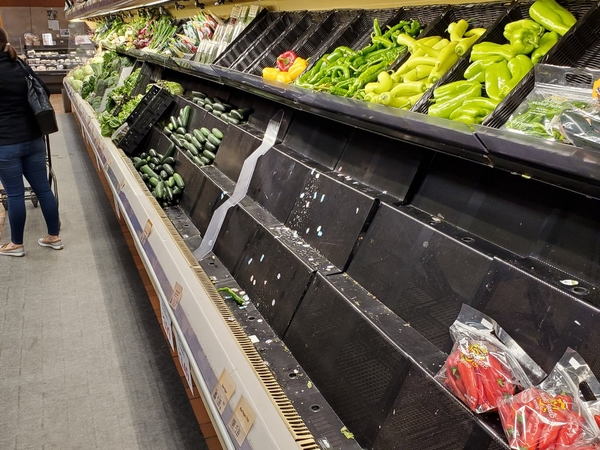 Preference for packaged produce
Savvas Tsoukalas at Mississauga, Ont.-based Savco Worldwide, Inc. noticed that some items such as salads were picked off as well as heartier fruits.“I’ve heard people talking about how they shouldn’t buy fresh produce because people touch it. There are people who are afraid of it, you can see, anything bagged is gone,” he says. At the same time, he notes that unlike items such as canned beans or toilet paper which tend to have set delivery dates, produce wasn’t cleared out and that is a positive sign because suppliers are fulfilling the supply chain.

Tsoukalas also predicts that the boost in grocery shopping will continue. “Retail produce benefits because everybody’s going to be eating from home. On the foodservice side they’re devastated. But everyone still has to eat, and they still go to the grocery store,” Tsoukalas says.

Meanwhile, Vince Carpino of the Toronto-based supplier Tomato King notes that the spike in business has been significant but that he too doesn’t anticipate dry pipelines anytime soon. “There has been pressure from retailers to fill orders. Stores are busy so they put pressure on distribution centers who can’t fulfill the demand, so it’s created pressure on us to fill orders,” he says.

Increased sales of organic produce
“Initially, there were some concerns that people would avoid fresh produce when these events began unfolding, but fortunately that has not been the case,” says Sydney Fairchild of Bridges Organic Produce, headquartered in Oregon. “As people aren’t eating out as much and cooking more at home, they are purchasing more produce and they are also increasingly choosing organics. Some of our retail partners are seeing as much as double the sales that they had at this time last year.”

She adds: “We are currently transitioning from one growing district into another for our Mexican vegetable program, so it’s tough to keep up with this high demand at the moment. Prices were already high due to weather issues earlier in the season. Despite this, we aren’t seeing prices skyrocket across the board. It’s very dependent on the product and the retailer’s shelf-capacities.” 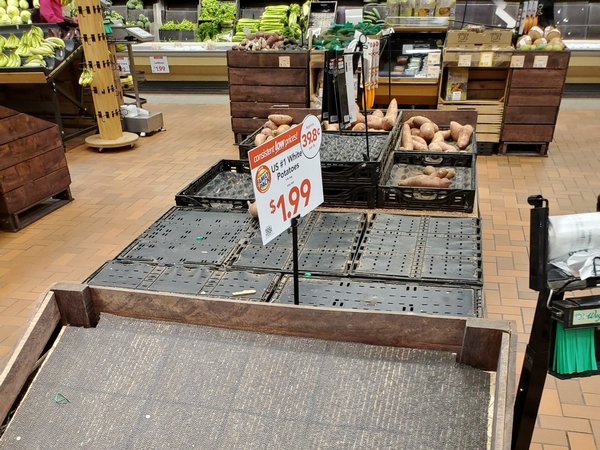 Doing business differently
Carpino added that things looked different at the Ontario Food Terminal, Canada’s largest wholesale fruit and produce terminal, over the weekend. “Sunday was busier than normal—about 30 percent busier,” he says. “It wasn’t busier people wise, but it was busier moving produce wise. We found we did a lot of phone business though—so people were phoning in their orders rather than coming to the terminal.”

Border closure
In the meantime, suppliers are also waiting to find out where things will go from here, particularly around the issue of border closures.

Yesterday, Canadian Prime Minister Justin Trudeau announced closing borders to anyone not a citizen, an American or a permanent resident. “I think our biggest problem will be what happens with the border if we have trouble crossing drivers from the U.S.?” says Carpino. “If I’m driving a truck, do I really want to come to Canada? Every driver can say no to a load. I hope that doesn’t happen and that the driver feels secure to drive here. I feel we’re an essential service. The U.S. didn’t want to close borders to essential services or goods and that’s a good sign.”

Foreign worker shortage?
And as April approaches, others wonder about temporary foreign workers. “If we can’t have people come in from Jamaica or Mexico to come and help with growing and harvesting and planting in Ontario, what will happen? Product gets planted around the middle of April and farm labor usually shows up around that time. So, will they be quarantined?” asks Tsoukalas.