In 2019, New Zealand exported a record amount of fresh fruit and vegetables - a total of 1,38 million tons. That is five percent more than in 2018. It is also even a little more than in their record 2016 year. In 2019, these exports represented a value of NZ$ 2,4 billion. The kiwi is, by far, the most important product. In quantities, this fruit represents a share of 44%.

New Zealand's 187,000 tons of onion exported last year was higher than in 2018. But, not so long ago, this was more than 200,000 tons. Following far behind these top three products, is pumpkin. At least, when it comes to quantities. In value, cherries outshine even onions. These are followed by avocados. In 2019, almost 22,000 tons of this product was exported. That is more than the previous two years but equal to the 2016 amount. Blueberries are also gaining ground in New Zealand. The 2,150 tons exported is, however, not as high as it could be. 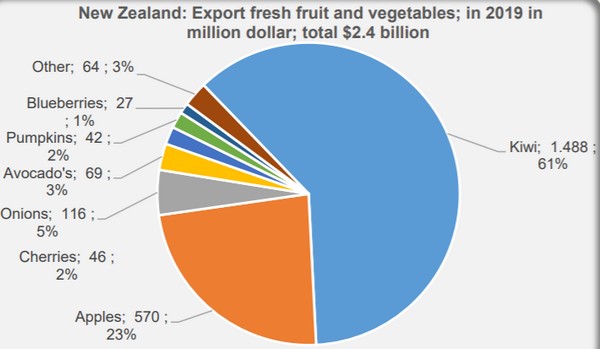 More going to Southeast Asia
More than half of the fresh fruit and vegetable exports from New Zealand go to countries in southern and eastern Asia. In recent years, this region's share has done nothing but climb. Last year's totals amounted to 720,000 tons, 11% higher than in 2018. The European Union is New Zealand's second-largest sales area. Exports to this region, however, dropped slightly. Together, these regions represent 85% of the total amount of fresh fruit and vegetables exported from New Zealand.

It is, however, somewhat unclear how much the separate countries represent. The New Zealand Bureau of Statistics specifies that some export products go to the EU. They do not say to which countries, specifically. This does, however, mainly concern exports to Belgium. Last year, New Zealand sent about 200,000 tons of fresh goods to Japan. This volume is the same as in 2018.

30% more to China
China was a real growth market for products from New Zealand last year. Exports to that country climbed by 30% to 175,000 tons. The sharp increase of (direct) exports to the United Kingdom is striking. This also increased by 30% but to 68,000 tons. Together, Taiwan, the United States, and the Netherlands were all good for more than 60,000 tons too.

Last year, of the total kiwi exports from New Zealand, more than 330,000 tons (55%) went to Southeast Asian countries. That is slightly more than in 2018. In the European Union, 212,000 tons of this fruit was sold. That is six percent less than in the previous year. Of the total number of New Zealand kiwis exported, 90% goes to these two regions of the world. In Southeast Asia, Japan and China are the two most important buyers. These two countries are followed at a distance by South Korea and Taiwan. Trailing these are the US and Australia. 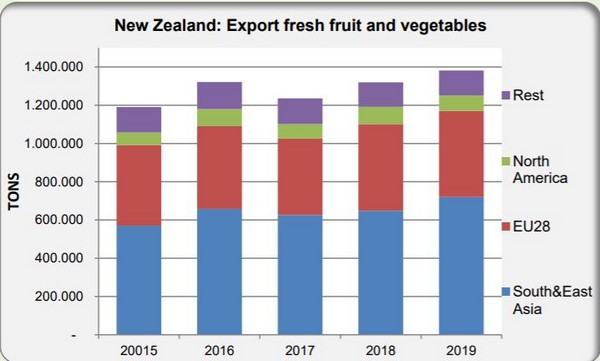 More apples again
In 2019, New Zealand was able to sell six percent more apples overseas than in 2018. The substantial increase in exports to various Southeast Asian countries is especially striking. In that region, it is mainly Thailand, Vietnam, and Hong Kong that bought the most apples from New Zealand. That is in contrast to India. There, in 2019, New Zealand apple exports fell by more than a third.

Royal Gala apples are New Zealand's most important export apple variety. With 132,000 tons, a record quantity of this product was exported last year. Sales of Royal Galas to the Netherlands, in particular, went well in 2019. Braeburn exports decreased after 2018's growth. This concerns mostly sales to EU countries.

Fujis are at number three. New Zealand sends this apple variety primarily to Asian countries. There, Taiwan is the top buyer. The UK is New Zealand's most important market for Jazz and Pink Lady varieties. Jazz exports fell by ten percent. But, those of Pink Ladies rose by the same percentage. 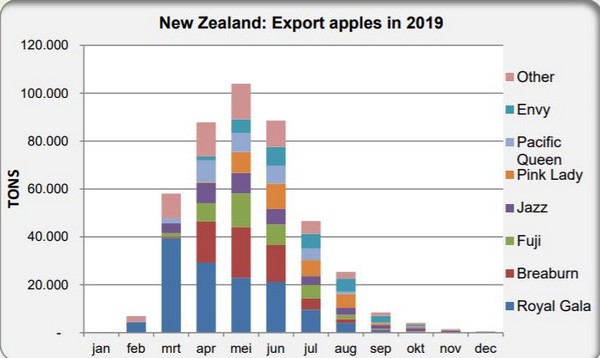 Onion exports recover; a lot sent to the Netherlands
Onions exports from New Zealand rose sharply last year, compared to 2018. That year did, however, see minimal amounts of this product being exported. With 40,000 tons, the Netherlands was the top buyer of New Zealand's onions. This country was followed by Indonesia, Germany, and the UK.