Start of spring harvest of fresh rhubarb from regional cultivation

Just in time for the meteorological beginning of spring, Landgard has now brought the first freshly harvested German rhubarb onto the market. The vegetable is initially still available in limited quantities and comes from heated greenhouses of selected farms in the western region.

"Similar to last year, our growers in the West will then probably start to harvest the first rhubarb from open field cultivation at the end of March, but it will still be protected against the low night temperatures with a double insulation layer, made of film and fleece," says Kerstin Hartmann, Sales Manager of Landgard West Obst & Gemüse LLC, looking forward to the start of the main harvest. 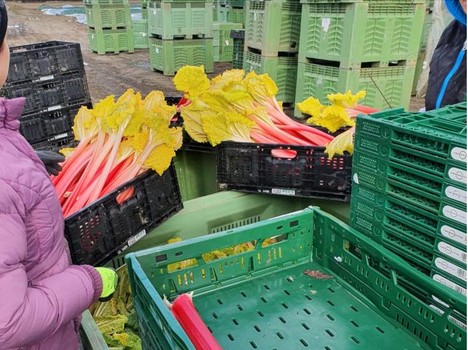 Yield at previous year's level
"As things stand today, we are expecting an overall harvest volume comparable to that of the previous year in good quality. However, due to the difficult weather conditions - dryness last autumn and strong wind in spring, which damaged the film cover in the fields - the plants may be somewhat uneven, especially at the start of the harvest, and may be thinner than normal overall."

In the West Rhineland region, about 30 Landgard member farms are producing the traditional spring vegetables on about 200 hectares. The heart of West German rhubarb cultivation lies in the foothills of the Cologne-Bonn Bay. There, the red rhubarb stems find their optimal growing conditions. Freshly harvested, the rhubarb is mainly sold in the regional trade. Landgard also supplies a total of around 500 tonnes of rhubarb to industry, where it is processed into juice, for example.

Available into June
From the beginning of May to the beginning of June, consumers in eastern Germany can also look forward to fresh rhubarb from regional cultivation. "This year the conditions for rhubarb in our region with a mild winter and very dry soils were quite demanding. As a result, we are now expecting slightly lower quantities than last year," explains Bernd Meinen, Managing Director of Landgard Ost Obst & Gemüse.