"Italian Rainbow Chard is selling like crazy this year!"

In the southern German growing regions, the domestic vegetable campaign is now slowly but surely getting ready to go: The first harbingers of spring -such as asparagus, spring onions and wild garlic- are now increasingly arriving in specialist shops. Parallel to these first deliveries from the nearby Palatinate vegetable garden, even unusual imported goods from Italy are being well received, says Berkay Savran, owner of KM Frischdienst in Bad Kreuznach.

For the first time, regional wild garlic arrived in the warehouse of the locally operating wholesaler yesterday Prices per kilo are currently fluctuating at around 20 euros/kg. "As long as these prices remain high, people will not buy much. We don't expect an increased demand for wild garlic until late March - early April". The majority of the wild garlic goes to upscale gastronomy and trained chefs. Nevertheless, the major supplier dares goes so far to claim that demand for is somewhat declining. "Even the traditional seasonal items such as asparagus and wild garlic tend to be available earlier and longer. This already has had an effect on the demand."

Colourful chard: bestseller of the season
Parallel to the first domestic heralds of spring, the specialist trader also offers imported specialities. One of this year's top sellers is the colourful chard from Italy, Savran says. "This Rainbow chard is selling like crazy this year! In my opinion, this is due to the relatively low price level: last year we sold it for 25 euros/kg, now we offer the coloured leafy vegetables at a small extra price compared to the normal green chard - which costs about 15-16 Euro/kg." 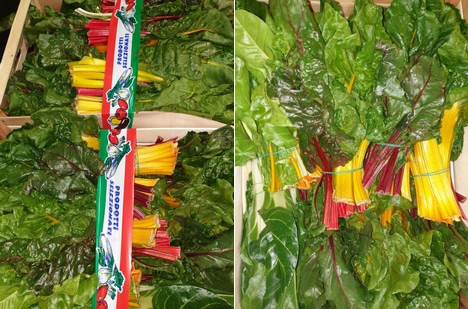 Rainbow chard is on offer from November onwards, well into the summer. The colorful leafy vegetables are grown near Ancona. Likewise, rocket, cocktail tomatoes and certain herbs are mainly sourced from Italy. In the case of rocket, it is expected that by the end of the month the company will switch to regional produce.

Unusual products for gastronomers
Up to 85 percent of the company's clientele is made up of restaurateurs, and the company also supplies regional Rewe branches and other retailers in the direct vicinity. "Our food retail customers mainly demand standard products such as tomatoes, peppers, cucumbers and top fruit. On the other hand, unusual fresh products tend to flow into the catering trade."