2019 was a record export year for Australian Citrus

As the Citrus Market Outlook Forum wrapped up, and the attention turned to the upcoming season, there was a chance to celebrate recent achievements.

2019 was a record export year; it was the first time more than 300,000 tonnes of citrus was exported from Australia and the first time the value had broken the $500million mark, with China, Japan and Hong Kong take the lion's share. 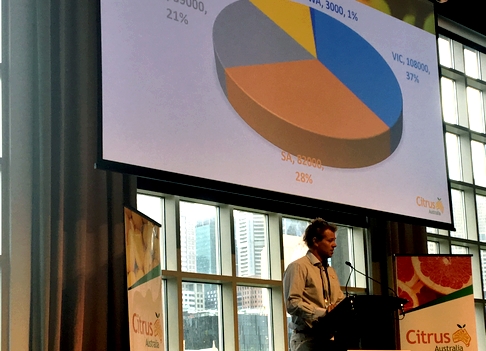 General Manager of Market Development David Daniels told delegates that the Chinese market continues to grow, and although there was only moderate growth from the previous year in 2019, it was because the fruit profile was predominantly outside the marketable size range.

"Nevertheless, it is good to see China is a little bit less fussy on some of those less popular grades and sizes which are making their way to over along with the premium stuff," he said. "Japan is holding steady 35-40,000 tonne mark. One of the big surprises is Thailand, and that is a massive effort there, especially from Queensland mandarins. I think that is on the back of the Queensland Citrus Exporters' Group, that has been running for close to a decade. It is the most unique situations that I have ever seen where a group of like-minded businesses put the hat around and raise some money to do voluntary promotions and marketing activities in the country - and it appears to be working." 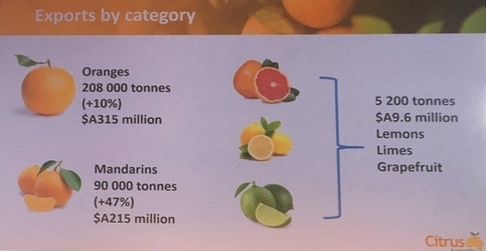 There were some other impressive milestones, with the Philippines breaking the 10,000 tonnes for the first time after gaining 'meaningful access' in 2012-13, and the UAE also over the 10,000 tonne mark.

"While China, Japan and Hong Kong is taking most of the trade, we usually say 10,000 tonnes is a good market," Mr Daniels said. "We have just over half a dozen markets taking that, as it is skewed to a few main markets. We actually export to 55 different markets each year, but it's often just a couple of tonnes here and there. The United States is even outside the top 10. Once upon a time, one in three oranges that were grown here was shipped to the USA, but that has sort of faded away."