According to the latest data from Global Trade Atlas, the value of fresh Australian vegetable exports increased once again in 2019. This continues the recent trend of the rising value of vegetable exports that is ensuring the vegetable industry is well-placed to meet its goal of 40 per cent growth to AUD$315 million in fresh vegetable exports by the end of this year. AUSVEG International Trade Manager Sam Turner reports.

Data from Global Trade Atlas and Trade Map indicates that Australian vegetable exports have increased again in 2019. Export data for the calendar year indicates that export value has increased by 6.6 per cent to $299 million and tonnage growth of 5.4 per cent to 230,890 tonnes. 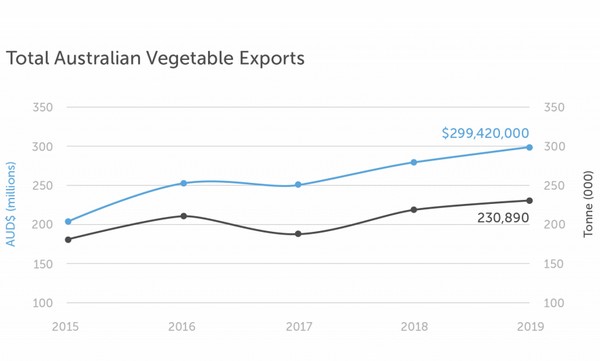 The industry is well on its way to achieving its goal of a 40 per cent increase from 2015 in exports to $315 million by the end of 2020. The top five markets for Australian fresh vegetables remained largely stable for 2019. These are Singapore, United Arab Emirates, Japan, Malaysia and Saudi Arabia, which has replaced Hong Kong in fifth position.

These five markets receive around 53 per cent of Australian fresh vegetable export volumes. The top export products for the period were carrots, onions, potatoes, asparagus, and brassicas with carrots representing 32 per cent of exported product value. 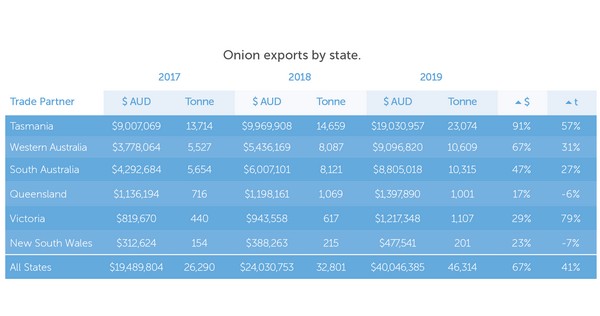 Much of this growth was driven by increasing exports from Tasmania to Europe with Belgium, France, Germany and the United Kingdom receiving large quantities of Tasmanian onions.