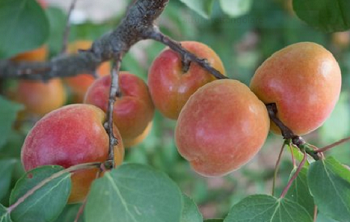 Climatic changes such as an increase of air temperature and rainfall variability can directly and/or indirectly affect pathogens and the plant diseases they are causing. All important life cycle stages of fungal pathogens are more or less directly influenced by the prevailing environmental conditions. The infection process is particularly dependent on the species specific temperature and humidity requirements of the pathogens. Climate change will have several consequences for agrosystems, one of which will concern changes to the development of pathogens.

Monilinia laxa is an important pathogen causing apricot blossom blight with great losses, particularly in organic farming. Scientists of INRA (France) have evaluated the consequences of climate change on blossom and twig blight of apricot. "A Climatic Index of accumulated Blight risk (CIB) was built, to obtain the weighted sum of blossom blight incidence throughout the blooming period" the scientists explain.
An epidemiological model to calculate the incidence of blossom blight during every potentially infectious episode and based on biological parameters was calibrated using a trap pot experiment where trees were placed in orchards and subject to various meteorological conditions. The CIB derived from this model was evaluated on field data, and it resulted in a robust and useful tool to predict the effects of climate change on the development of apricot blight.

"Then, using the CIB with a phenological model to predict blooming periods in the future, we estimated the risks of apricot blight until 2100 on four contrasted apricot cultivars and in three geographical zones under two ‘representative concentration pathway’ emission scenarios, RCP4.5(median) and RCP8.5 (pessimistic). Results revealed different effects of climate change depending on the cultivar and altitude," continue the scientists.

Apricot trees would bloom earlier (up to a difference of 50 days between 1950 and 2100) under climate change. Under the combined effects of these shifts of blooming period and changing climatic conditions, late cultivars such as Bergarouge might see a reduction in the risk of blossom blight (down to 31%) because of warmer but dryer blooming periods. Other varieties (e.g.: Bergeron) could experience an increase in this risk by up to 27% with a shift of the blooming period towards rainier conditions at the highest altitudes.

"These results could be used to anticipate future changes as well as be used at present as a decision-support tool for farmers" conclude the scientists.