Potato season has an early start in Majorca

The potato season has started much earlier than usual this year thanks to higher than average temperatures in Majorca between December and February. The Matthew Export company started collecting its Lady Christl variety this very Wednesday and the first shipment will be on its way to the UK on Saturday.

"Climate change is forcing us to adapt in many ways,” says Mateu Export’s Manager, Joan Mateu. “During the winter months this year, the plants had many hours of sunshine but the nights were cold, which protected the potatoes from fungi and mildew, which can wreak havoc on production.”

The effects of record breaking floods from two storms and ground frosts over the last few weeks have been controlled by technology, but Joan Mateu says the worst has yet to come. 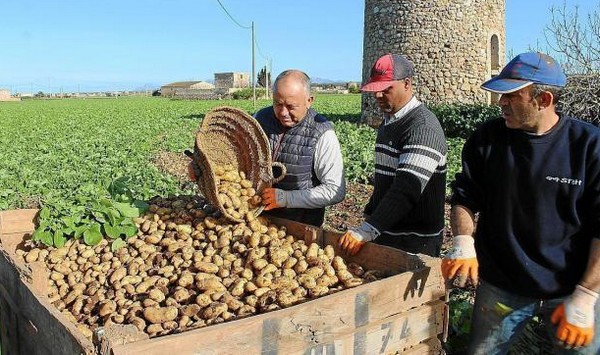 Brexit Effects
Negotiations over the implementation of Brexit will last for eleven months and have put a massive burden on potato exporters, who are carrying out this year’s campaign under the same conditions as they did previously.

"Brexit has already shown its face and now we are asking the Balearic Government and City Council to help us raise our concerns with the Central Government,” says Joan Mateu. “We rely on the the English market and the close relationship we’ve had for almost a century has supported us during very critical times".

As explained on majorcadailybulletin.com, Mateu Export is the largest company in Sa Pobla with 420 hectares and a 65% share of the market, followed by Esplet which has 35% and will begin its campaign shortly. The potato agricultural sector is calling for customs inspections to be performed at source which they say would save time, avoid queues and increase competitiveness.