“Not plain sailing, but enough factors in our favour for a good season” 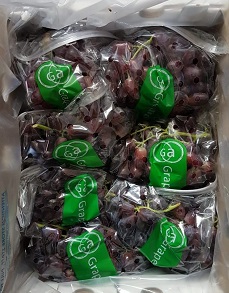 Grapes never stopped moving on the Chinese market as long as one has loaded the right varieties for that market, says Leon de Kock, CEO of Grape Alliance Marketing: Crimson (right), Sweet Globe and Autumn Crisp.

Malaysia and Singapore stopped placing orders for a while; they were very worried about volumes diverted from China but their fears of a deluge haven’t realised.

“When you have those three varieties in the market, you don’t have a lot of problems. The season hasn’t been all plain sailing so far but there are enough factors in our favour to make it a good season.” The Rand’s loss in value will provide producers with a nice boost towards the end of the season.

It’s their third week of putting Crimson from the Hex on the Chinese market, fewer than the 15% to 20% of normal years from the Hex because berry size is not as big as usual, reducing available volumes, but the market is faring really well, Leon says.

“Black seedless is a disaster in China, but it’s not unique to this year and it’s not because of the coronavirus. Black seedless in China has lost its shine. There’s just not demand for it and more volumes outstrip consumption. China is very volatile and if you put down a product they don’t want, you take a beating.”

He says that the impact from the rain in the Hex River Valley was completely underestimated. “The ramifications of the rain are much bigger than was initially assumed and I’m of the view that the Hex will be 20% down on its volumes.”

There are a number of mid-season varieties whose damage only appeared two or three weeks after the rain. Unfortunately once berries have burst, they are not suitable for raisin-making. “I’m convinced that all of that fruit were sent to cellars, which is unfortunately the last thing a producer wants to do.”

Unwanted varieties in Europe
Europe is stable; two South African rivals have just arrived in Europe where Peru has been sending more responsibly and programme-driven, he notes, without the peaks of last year. 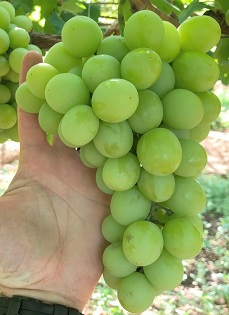 “There are however a lot of unwanted varieties on the market at the moment. There is a lot of fruit in Europe but not necessarily a lot of good fruit."

He continues: "Among my clients there is a 2 euro price difference between the sought-after varieties – the same as in the rest of the world: Crimson, Sweet Globe, Autumn Crisp (right), plus Arra15 in Europe this time of the year – and those that the market doesn’t want.”

The whole industry is on the same page, he says: there is widespread recognition that a producer’s varietal mix needs to conform to client specification, but the grape industry has been through a couple of difficult years and vineyard renewal is capital-intensive.

The Middle East is under extreme pressure, the usual pressure expected when India starts its grape campaign, it’s absolutely standard for this time of year, he says, because they offer product at much lower cost than South Africa. India hasn’t sent much to Europe yet, their first grapes have arrived but the market is empty and the volumes were moderate.

The South African Rand recently lost a lot of its value – it’s currently R15.36 to the USDollar, compared to R14 at the start of the year – which works in the favour of exporters.