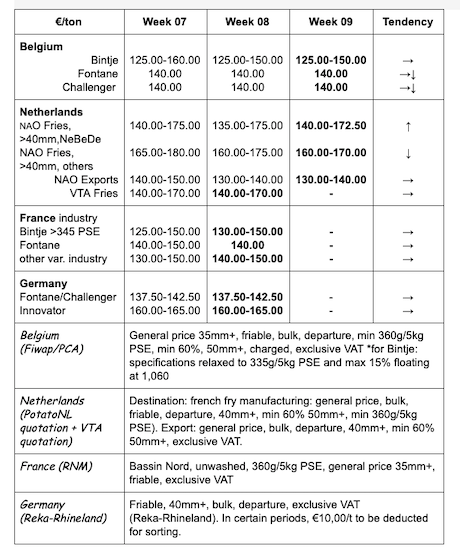 Little activity on the industrial markets. The demand is still waiting as the supply is more present. Some export towards Southeastern Europe and Africa. 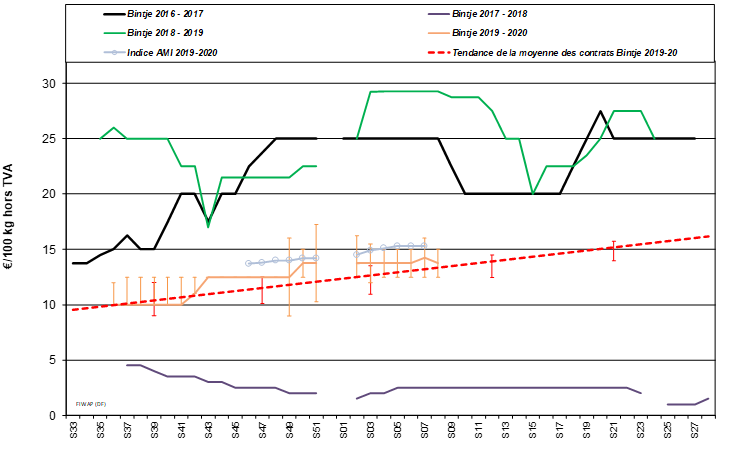 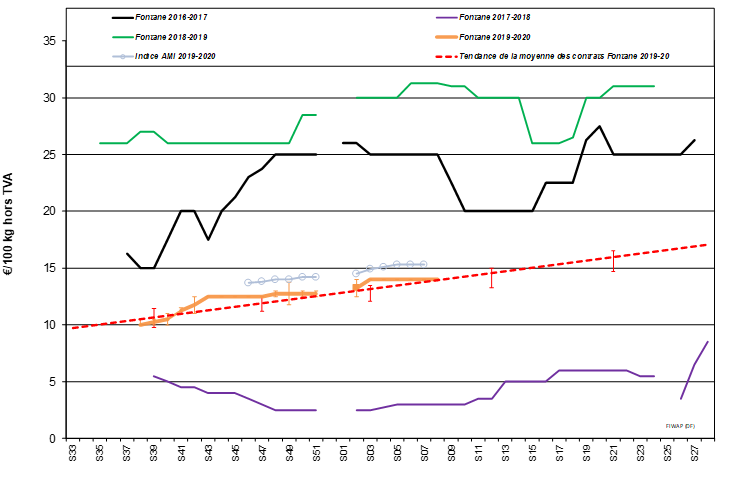 For the last 2 varieties, a Belgian processing firm is proposing lower prices. 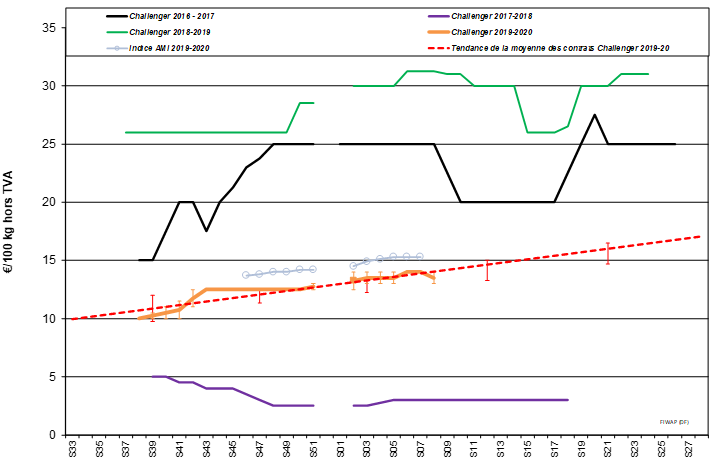 Bintje plant: Prices are down (but no quotation due to insufficient transactions), little trade. Dutch plant, class A, returned March 2020, by 10 tons, in big-bags excl.VAT:

Netherlands
Industrial quotations are slightly down for the first time in several weeks. The lack of dynamic export is noticeable and leaves the industry alone to control the market. The demand from the factories remains limited, while the publication of the stocks in Germany, France and Belgium is not likely to strengthen prices. The industry is now running at full speed, based on (excess of) contracts. In export, the preparers must make some concessions in terms of prices, with prices calibrated departure big-bag at +/- 16.00 €/q (4.00 €/q less than in early January), which already seems to boost the volumes a little. Hope remains high, March being a traditionally active month for export. 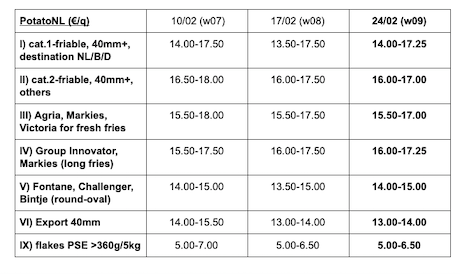 Dutch export in January went well, with 75,000 tons shipped, which brings the total for the season to 482,200 tons, the highest figure in 5 years. Included in this total, shipments to Germany doubled at 60,300 t, and exports to Eastern Europe reached 28,000 t.

For the industry, prices are stable but the demand is (too) weak. Quotations are maintained despite the very few transactions observed.

Stocks at the end of December were estimated at 3.02 million tons, compared to 2.75 million tons for the average of the last 3 years. A little over half of the stock was intended for the processing industry, including 89% of contracts. For the fresh market, the contracting rate of stocks was only 22%.

Organic potato: producer prices returned trade: between 63 and 65 €/qt. The mild temperatures in January and February did not stimulate the demand, and did not really influence the conservation qualities negatively. The organic (and conventional) sector has indeed invested in fridges and refrigeration in recent years. The sector estimates there will be enough supply of organic potatoes until the end of May. After a very strong increase in the consumption of organic potatoes during the first 9 months of 2019 (+16% more in 2019 than in 2018). Consumer purchases were down 12% in October and December 2019 compared to the same months in 2018. It is too early to see which influences organic imports from Egypt will have (10,000 t in 2019), and later, the imports from Spain (10,000 t also) on the German market (and by extension those of the Benelux and Scandinavia). 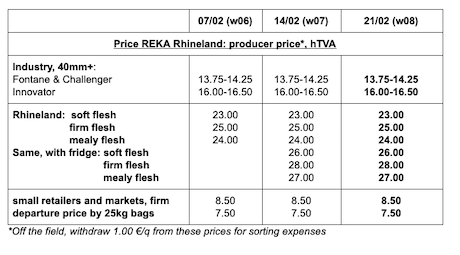 Great Britain
Few changes on the markets, which are considered to be calm. The price level remains higher than the prices observed on the continent, with Maris Piper between 19 and 23 €/q for peeling, and the superior quality varieties (Agria, Markies, Ramos) between 24 and 35 €/q calibrated. On several markets, the superior quality maintains its prices, while a more pressing offer of less quality creates a slight downward pressure.

The heavy rainfalls of the past few days/weeks continue to slow down early plantings, both in Cornwall and elsewhere (Channel Islands, Pembrokeshire).