The exports of the Chilean late production, from week 5 onwards, have been lower than the updated estimate and to the actual shipments of the last two seasons. Among the events that have resulted in the current scenario are the current market state, the complex situation in China due to the Coronavirus outbreak and the results obtained in North America and Europe in the peak period due to the increase in the supply of the Southern Hemisphere. 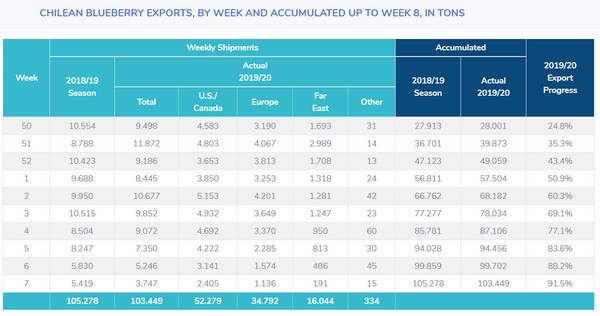 This has led, in some cases, to stop the harvests for fresh consumption and start to divert fruit to IQF. On the other hand, the weather conditions, especially the rains of week 6, affected the southern part of the country, reducing the amount of fruit suitable for exports in fresh, as well as the high temperatures that affected in a concentration of the crops, ending the season earlier.