Citrus Leprosis is a considerable threat to Florida citrus

Citrus leprosis is an exotic viral disease not currently present in Florida. This disease is of interest since it was reported in citrus in Florida and Brazil in the early 1900s, where it caused great crop and tree losses, but it was eliminated from Florida in the early 1960s.

Currently, the disease is widespread in South and Central America, including Mexico, and is transmitted by false spider mites that are present in Florida. The combination of the existence of the disease vectors in Florida and the presence of the virus in nearby production areas makes it a potential threat to the Florida citrus industry.

Citrus leprosis is a non-systemic viral disease that causes chlorotic lesions on citrus leaves, fruit and twigs in response to feeding (and virus transmission) by infected mites. False spider mites have a wide host range, enabling them to persist in many environments. In the absence of the virus, these mites still cause damage to citrus. Because the vector exists in Florida, the risk of disease spread remains if the virus is reintroduced in the citrus-producing areas.

Citrus leprosis virus can be transmitted after a short period of feeding (four to seven hours) on an infected plant. It then takes at least two hours of feeding to transmit the virus to a new host.

The disease is found in Mexico, Brazil, Colombia, Venezuela, Panama, Costa Rica and other countries in South and Central America (Figure 1B). Citrus leprosis is currently a highly important citrus disease in Brazil and other areas of South America due to the yield loss resulting from infection. 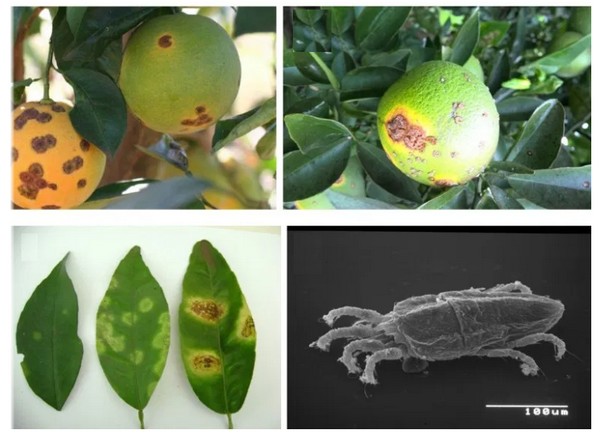 Disease symptoms in fresh fruit abolish their commercial value, and high levels of infection can drastically reduce yield and even cause stem death and complete yield loss. As a result, growers are spending huge amounts of money trying to control the mite population. Citrus leprosis primarily affects sweet oranges, but some grapefruit, mandarin, lime, sour orange, clementine, pomelo, kumquat and sweet lime can also be affected.

According to citrusindustry.net, resistant genotypes include varieties of sour orange, Meyer lemon, Royal grapefruit, mandarins, Minneola tangelo and Temple tangors. The susceptible and resistant varieties of citrus differ somewhat for the cytoplasmic and nuclear leprosis viruses. No varieties were found that show systemic infection, meaning that symptoms are only found in the leaf, fruit or twig tissue where the mite feeds and the virus is transmitted.