South Africa postpones promotional campaign in China due to coronavirus

The promotional campaign for South African grapes, initially planned at wholesale markets in Guangzhou and Shanghai next month, has been postponed to next season due to the Corona virus, and feedback from the market in China, says Clayton Swart, communications manager at South African Table Grape Industry.

The extension of the lunar new year because of the epidemic and subsequent quiet at the markets has retarded the flow of South African grapes into China, but Clayton also points out that last season China took at most 4 million cartons (4.5kg equivalent) of South Africa’s total 61.1 million cartons.

“Within the total picture of South African exports, the Corona virus hasn’t had major impact on our grape exports.”

He expressed their deep regret at the loss of lives in China and elsewhere and that they remained hopeful for a cure. 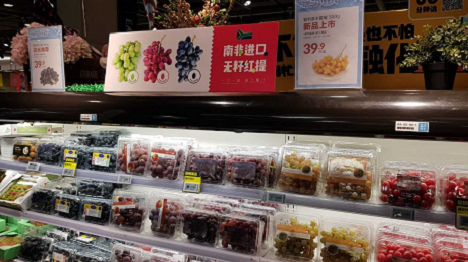 South African grapes in a Hema supermarket during a previous season

The early grape season brought with it some unintended consequences, one of those being that it allowed shipments for China to get going earlier, in that way entering before the current bottleneck.

South Africa would dearly love to increase the amount going to China, though – it’s only managed to reduce its reliance on the combined UK-EU market by 5% over the past few years; around 75% of all South African exports still go to the EU and the UK.

The other benefit brought by an early season was that it delivered early varieties in the Hex River from the rain almost a month ago. A week after the rain it was evident that damage would be greater than initially anticipated, and the latest crop estimate for that region has been adapted downwards by two million cartons.

It’s been a very good season for the small Olifants River region, particularly badly hit by the drought, but this year exceeding the highest band of the first crop (intake) estimate by a couple of hundred thousand cartons, Clayton says. The Berg River region is having a good season with the crop estimate adjusted upwards. "This points to the South African table grape industry’s geographical diversity with the five regions spread widely apart, thereby providing a buffer/cushion against adverse weather and so forth."

The market in Europe has been emptier this season, as India’s harvest is delayed due to rain; Clayton notes enquiries about grapes from especially Russian importers at SATI’s Berlin stand.

Brexit came and went without a hitch, seamlessly carrying on as before thanks to a standby agreement between South Africa and the UK.

“The youth of any of our vineyards means that South Africa is poised for new growth and it is steady, organic growth. We’re quite satisfied with it,” he says.

In a mature grape producing area like the Hex and Berg River, where new farmland for expansion is limited, there are extant vines of old, sometimes seeded varieties. They have not been summarily removed because given careful marketing, there are still niche markets for them.