All in all, 2019 was an exciting and sometimes challenging year for the Hungarian agricultural sector as well. Due to the difficult weather conditions, the quality and harvest of stone fruits, which have always been one of the most important export products of the Central European country, suffered losses. Nevertheless, the future is still looking bright: A lot has been invested in new packaging, variety diversity and protective measures, says Csaba Juhos, Managing Director of the South Hungarian export company Fresh Fruit Tész.

During Fruit Logistica, the export-oriented company is represented every year on the joint stand of the Hungarian agricultural sector in Hall 21. Germany, as well as neighbouring Austria, are the most important sales markets for the Hungarian export companies. The Fresh Fruit Tész company is also specialized in export, mainly of plums and pointed peppers, explains Mr. Juhos. Because of the packaging discussion in Germany, we too have switched over to alternatives. For example, our sweet peppers are no longer packed in trays but in flowpacks. This enables us to reduce plastic by up to 70%, as is required by the German food retail industry today." 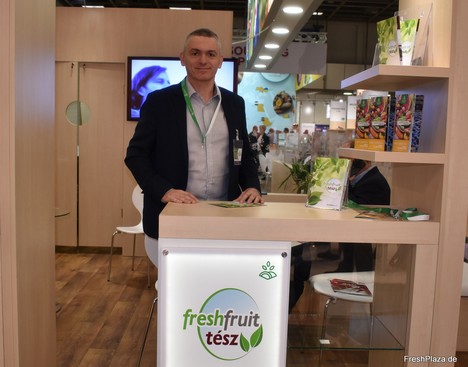 Juhos Csaba at the Hungarian joint stand during Fruit Logistica 2020

With the new measures regarding packaging, the exporter now wants to position itself as an efficient and competitive partner for German food retail chains. The outcome of the current talks will be decisive in this respect, he says. "The negotiations with Rewe for the upcoming season are already in full swing. We hope that we will be able to supply our main products, plums and peppers, to the German food retail trade from May-June onwards," says Juhos.

Variety & competition with the Balkan countries
Alongside pointed peppers, plums are the figurehead of the South Hungarian agricultural society: with an annual production volume of around 2,000 tonnes of blue fruit, Fresh Fruit Tész is one of the main suppliers in this sector. Juhos: "Recently we have added two new varieties for the fresh market to our assortment - namely Geisenheimer Topend Plus and Top Hit - which originally come from Germany." 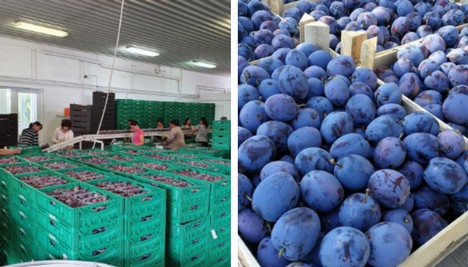 By extending the range of varieties, Hungarian producers are trying to distinguish themselves from the 'new' competitors from the Balkans and Moldova. Despite increasing competition from these growing countries, Juhos does not believe that these countries will prevail in the market in the long term. "Hourly wages in Hungary have roughly doubled in the last few years. A similar development will also occur in these countries in a few years' time."

Increased production costs
Regardless of the competition from abroad, the production costs of plums in particular have risen considerably in recent years. "Firstly, the increased hourly wages have a noticeable impact on the plum industry, simply because plums are relatively quite cheap at the POS. In addition, climate change inevitably means that we have to take protective measures in order to be able to arm ourselves appropriately against continuing drought and hail damage".