North Queensland has copped a battering this week, with heavy rain inundating streets and closing roads in several towns - but at this stage, it appears most of the region's fruit and vegetable growers have escaped any major damage.

Ayr was one of the hardest hit towns, just to the south of Townsville, with the Bureau of Meteorology recording 483.6 millimetres from Sunday to Wednesday. Cairns received 276.3, Ingham recorded 212.8 and Townsville 145.4.

North Queensland is home to the majority of Australia's banana production, but many are welcoming the levels received, with no major damage to crops or equipment reported at this stage. 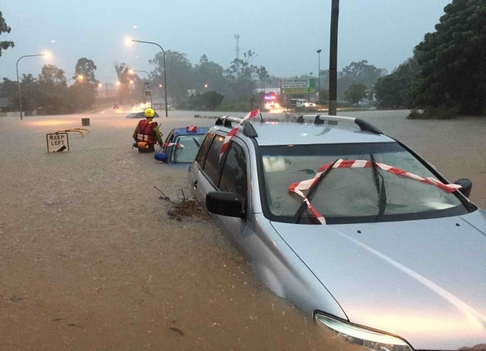 The Australian Mango Industry Association reported that with the storms and showers that passed through the Mareeba/Dimbulah region, it caused some slight delays in picking and packing of late season varieties such as Keitt. Further south, the Bowen and Burdekin have finished their harvest seasons for this year, although the heavy rain did not affect that area.

The heavy rainfall also did not affect Australia's major Achacha plantation, in the Burdekin Shire district, with harvesting beginning this week despite the extremely wet conditions. While, the North Queensland avocado season is still a few weeks away, therefore the rain is not expected to be much of an issue.

At this stage the highway closure near Townsville has not caused any major problems for fresh produce growers, and it is still too early to know if or what effect these weather events have caused on the produce wholesale markets.

Seven flood Warnings are current for Queensland, due to the recent heavy rainfall across the north, northwest and central interior, and are expected to last into next week. However, there is not expected to be any severe rain over the weekend.

The rain in the north comes just weeks after Australia's south were devastated by catastrophic bushfires, adding to years of drought. Again, there has been a heatwave, with the city of Melbourne and other regional centres across Victoria battling consecutive days of high-30s to mid-40s, which will continue to test growers.

It was a similar story in South Australia, with Renmark exceeding 42 degrees Celsius on Friday, and a Severe Heatwave Watch and Act message was issued for the Adelaide Metropolitan region, before heavy rainfall and thunderstorms developed throughout the afternoon, stretching into Western Victoria.

A grape producer in Merbein, in the state's west, says they have had to introduce measures to reduce damage - not for the first time in the past few years.

"The heat here is becoming normal, so far we have reach 46 two times this year, which is not the best for our grapes," Budou Farms owner Enrique Rossi said. "But we have practices in place to mitigate any damage, such as canopy management, irrigation and cooling equipment (misters and low-level sprinklers), usage of biostimulants such as kelps prior heat wave, nutrition management and so on. However, this extremes in some cases do make damage, but usually localized upon each grower, as might catch a specific patch or variety in a very sensitive physiological stage."

Mr Rossi added that another issue with this "new normal" is that the water usage for cooling puts pressure on the already "precious" supplies, with Australia in drought.

"This year more than heat damage, we are embracing a new challenge that is wind damage and stress from it," he said. "Higher water usage, dries the top soil quicker and in places that do not have cover crop, top soil erosion and sand blasted fruit due wind is an issue, saying this, is only done during this severe drought conditions. Luckily for us we have not seen damage due heat this year, but we try our best to maintain our soil and vines in the best condition as possible."

The hot weather has also stretched into New South Wales, with the Riverina town of Deniliquin passing 46 degrees. The region is home to apple, citrus, and other fruit varieties.