Academics from MIT and Pontifical Catholic University of Chile

System for cooling without electricity

The key to the functioning of this simple, inexpensive system is a special kind of insulation, made of a polyethylene foam called an aerogel. This lightweight material, which looks and feels a bit like marshmallow, blocks and reflects the visible rays of sunlight so that they don’t penetrate through it. But it’s highly transparent to the infrared rays that carry heat, allowing them to pass freely outward.

A new system is described today in a paper by MIT graduate student Arny Leroy, professor of mechanical engineering and department head Evelyn Wang, and seven others at MIT and at the Pontifical Catholic University of Chile. in the journal Science Advances. The system is a device, which has no moving parts, and it works by a process called radiative cooling. It blocks incoming sunlight to keep from heating it up, and at the same time efficiently radiates infrared light — which is essentially heat — that passes straight out into the sky and into space, cooling the device significantly below the ambient air temperature.

Such a system could be used, for example, as a way to keep vegetables and fruit from spoiling, potentially doubling the time the produce could remain fresh, in remote places where reliable power for refrigeration is not available, Leroy explains.

Minimizing heat gain
Radiative cooling is simply the main process that most hot objects use to cool down. They emit midrange infrared radiation, which carries the heat energy from the object straight off into space because air is highly transparent to infrared light. 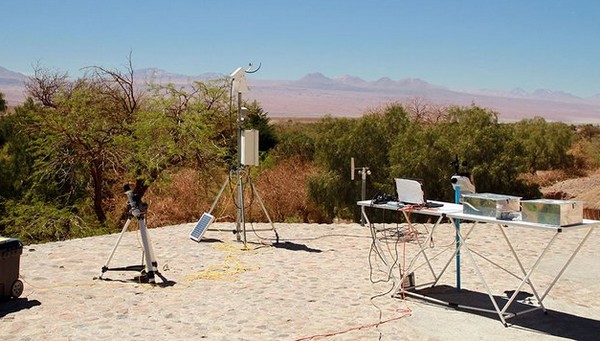 The new device is based on a concept that Wang and others demonstrated a year ago, which also used radiative cooling but employed a physical barrier, a narrow strip of metal, to shade the device from direct sunlight to prevent it from heating up. That device worked, but it provided less than half the amount of cooling power that the new system achieves because of its highly efficient insulating layer.