An abbreviated butternut season from Spain and Portugal this year has given space to butternut exporters from the Southern Hemisphere. In the Western Cape befresh, butternut packer and trader, would be sending more butternuts if they had them. As it is, they estimate to send out 180 to 190 containers until the end of May to clients split about 50/50 between the UK and Europe and the Middle East, plus a bit to Singapore, Canada and Russia. 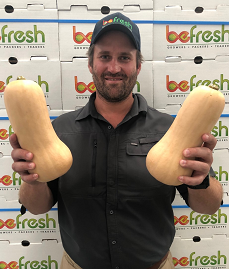 “Last year January we struggled to ship, there were still lots of Spanish and Portuguese produce in the market. This year looks pretty good, from week 52 I’ve had requests whereas last year it only started from week 3 or 4,” notes Erik de Wet, managing director of befresh (right, showing what an export butternut looks like).

He says the increase this year is more a function of his marketing activities to find new clients than a reflection of larger industry-wide demand.

“We can supply exactly according to size requirements because we grow butternuts on the 70 hectares of my partner, Bernard Conradie, then on another 120ha from different production areas across the Western Cape, from the Sandveld to Barrydale, all Global GAP-certified farms.”

Regarding butternut exports South America is competitive on price, but, he says, “we still have better quality and we try to distinguish ourselves with better quality product and we pack stricter."

Their packing facility at Klapmuts handles 60 to 70 tonnes a day (enough to singlehandedly crash the local market), filling mostly three, sometimes four containers a day. Unless, of course, they have power cuts like they had at the end of last year which left them for up to 8 hours at a time without electricity. Like all South African packhouses by now they have a generator, but like many others they’re looking to go off-grid, thus reducing their exposure to the unreliable national electricity supplier. 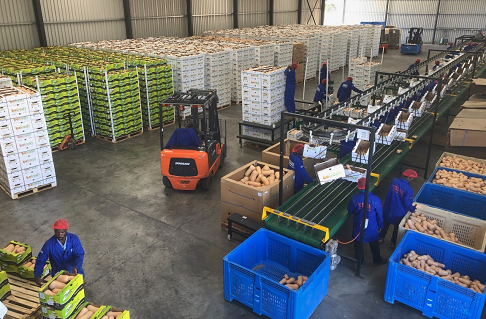 “It’s easy to grow butternuts. It’s not easy to grow export butternuts”
Butternut production in the Cape averages between 40 to 50 tonnes/ha. “We select as close to perfect from the crop. An export class 2 is still a local class 1, so those can go into local retailers and we send them back to the producer who can still get quite good money for the class 2. You’re never going to get ridiculous prices for butternuts, you make your money with the production in the field.”

Butternut growers like producing for them, he says, because they offer programmes and growers can plant large volumes, welcome respite from a volatile local market “where you never know how many other people are also planting. It’s easy to grow butternuts. It’s not easy to grow export butternuts. No scars and postharvest handling is important. Achieving an 80% packout is difficult.”

In the Western Cape growers plant butternuts from September to February. It’s a challenge to get butternuts early in January, Erik says, but fortunately there are grape farmers who plant early because they want to be finished with their butternuts before their grapes start. Similarly, there are potato farmers in whose crop schedules late butternuts fit well. “A nice, even production over five months is our aim. From February to March we have more than enough, everyone’s in that window.”

Fortunately butternuts don’t have to be packed as soon as they come in from the field, which gives a week’s grace to smooth over supply hiccups.

Their growers plant 80% Sakata Quantum, then roughly 18% Pluto and 2% Venus, which is a smaller butternut. “Size is the main difference between the varieties. Quantum is a medium-sized butternut that gives you a nice and safe size spread.” 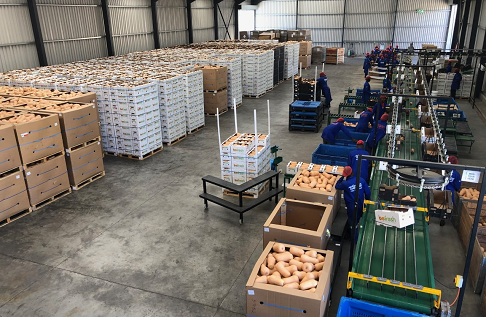 Expanded packhouse for export growth
He’s wary of expanding too quickly, but he does note that there has been quite a lot of interest, especially after they attended Fruit Attraction Madrid last year. They plan to send at least 300 containers next season, which represents almost 50% growth on current volumes. Expanded capability in the packhouse should allow them to pack five containers a day next year.

“I want the company to grow naturally, I like to first know there are buyers so you’re not stuck with volumes you can’t sell.”

He’d like to take the company further into packing. “There’s a demand for packing capacity for blueberries and citrus, both dovetailing nicely with butternuts, plus we’re well-located for that, on the main route to Cape Town.” At the moment they also pack some early summer watermelon and a bit of butternut during the South African winter for local retailers.