The influx of mandarins increased enormously. Israeli Orris really dominated events. Although they were expensive -in Berlin up to €3.50  per kg was being paid over the weekend- their accommodation was mostly quite smooth. In Frankfurt, they increasingly sold in 7 kg, 10 kg and 12.5 kg cartons. The consumers were quite happy to help themselves. Spanish Clemenvillas gained in relevance, but were sometimes difficult to peel.

Nadorcotts came out of Turkey, but in Hamburg were not as aromatic as people wanted. In addition to this, the first Turkish Murcotts and Novas arrived, which saw brisk sales, now and then. Moroccan products were added to the range. Although these were quite cheap in Berlin -at €1.60 to €2 per kg- they were hardly popular as the Israeli Orris. The importance of clementines was limited. Spanish batches determined this segment, primarily clementines. However, they lost some of their attention. This was due on the one hand to their diminishing quality and on the other to the extensive supply of mandarins. 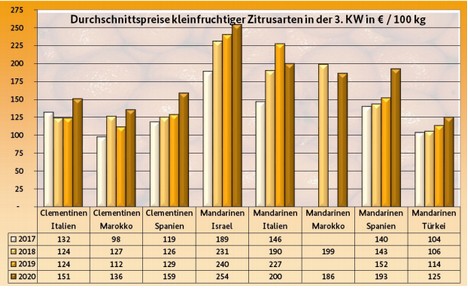 Apples
Business apparently went on without any real highlights. Locally, sales did not pick up until Thursday. As usual at this time of year, local items dominated the scene: in particular Elstar, Jonagold, Boskoop and Braeburn.

Pears
The importance of the European batches was sometimes limited. This was accompanied by an increase in the valuations for some varieties.

Table grapes
South Africa provided numerous varieties. As far as the quality was concerned, buyers rarely had anything to complain about. The rather positive demand could be satisfied without effort, as shipments increased.

Oranges
The excessively high temperatures did not exactly promote sales here. Furthermore, a certain saturation at the customers' side could not be denied; this made sales go less smooth than before.

Lemons
Spanish Primofiori dominated the markets. The demand could be met without any difficulties. The prices mostly remained at last week's levels.

Bananas
As usual, the provision matched the sales possibilities quite well. The unexcited, only rarely somewhat more lively interest was easily satisfied. In many cases, this meant that prices remained at their old level's.

Cauliflower
Italy and France shaped the events. The availability was limited. As a result, it was not possible to satisfy demand throughout. As a result, prices tended to rise overall.

Lettuce
Lettuce came in from Belgium and Italy. The demand could be met without any problems. Due to lower demands, handling was usually more intense.

Cucumbers
The prices knew only one direction: up. Night frosts limited the harvest in the Spanish growing areas, so that availability was more limited than expected.

Tomatoes
The supply was sufficient to satisfy the demand. However, it had still dropped off somewhat, so that customers had to dig deeper into their pockets every now and then. However, there were also promotions , certainly when the quality was less than convincing.

Sweet peppers
Spain apparently dominated here, followed by Turkey and Morocco. Availability had increased and was sufficient to meet demand. This was not particularly pronounced. As a result, prices mostly dropped.