Yesterday, The Greenery auctioned its first Dutch greenhouse asparagus. They were sold to the Dutch supermarket chain, Jumbo. Jumbo bought the first 5kg crate for the symbolic amount of €7,500. The Greenery and its growers then doubled that amount to €15,000. This money will be donated to the Dutch Cancer Society, KWF Kankerbestrijding.

This cancer society and its volunteers are trying to bring a reality where cancer is no longer a deadly disease closer. That is, sadly, not yet the case. Jumbo and The Greenery wholeheartedly support KWF's mission. This mission is less cancer, more healing, and a better quality of life for patients. The proceeds of the first asparagus sale testify to this support. 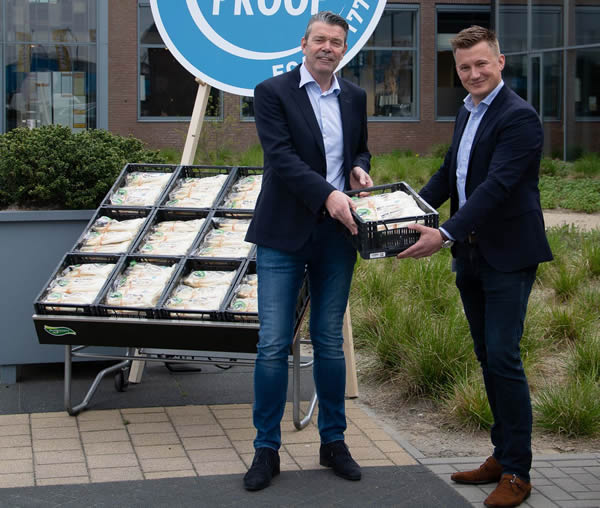 Jumbo's Ton van de Hoek, on the left, receives the asparagus from Jan Walta of The Greenery.

Ton van den Hoek of Jumbo Supermarkets says, “At Jumbo Food Markets, we ensure that food is an experience. We not only have a huge assortment. The focus is on tasty and healthy too. We also like to make space for firsts. We real asparagus lovers, this product cannot be on the store soon enough. We can now grant that wish."

The shortest chain for the best quality
There is an ever-increasing demand for asparagus early in the season. The Greenery and its farmers, therefore, focus on early production. They also promote this Dutch asparagus with its good taste and quality. The route from field to plate is kept as short as possible. In this way, The Greenery's growers ensure that the freshly-harvested asparagus quickly find their way to its clients' stores.

The versatility of asparagus
"Asparagus has made its fan's mouths water as soon as they think of the traditional meal of asparagus and ham," says The Greenery's Theo Jegerings. "There is nothing wrong with that. However, in recent years, we have also seen asparagus' versatility in modern dishes. Asparagus also tastes great on pizza, as saté, a hotdog, or cooked in an air fryer. You can find interesting recipes on www.verseoogst.nl/snacksperge."

This first asparagus of the season is available in limited quantities from this weekend in Jumbo Food Markets. The supply will gradually increase in the coming weeks.