Florida growers were watching last night to see just how cold the temperatures were going to get.

Weather forecasts were predicting a chilly overnight—possibly one of the coldest nights so far in Florida this winter. Plant City for example was to see a minimum temperature of 33°F while Immokolee would be slightly warmer at 36°F and Arcadia was set to hit 32°F. Add to that some winds that were projected to hit between 10-15 mph to the north.

In Bradenton, Fl., Roger Riehm of Blue Creek Produce LLC. took heart in the fact that the temperature drop was to only be a few hours long. “And we’re only going to have one day of this. It’s going to be back in the low to mid 70s throughout the rest of the week,” says Riehm.

The effects
What does this mean for Florida crops? “If it hit 32 degrees, there could be some impact on blossoming or damage to the fruit itself. You may not see the immediate effects until weeks later,” says Riehm.

Over at Long & Scott Farms in Mount Dora, Fl. though, Hank Scott hoped that the cold temperatures would slow production down. “The temperatures have been as low as 45 degrees and high as 85 degrees and our winter crops such as cabbage and greens are growing too fast,” says Scott. “Hopefully it slowed the growth some and killed a lot of weeds and pests. We need some cold weather to balance the pressures.” 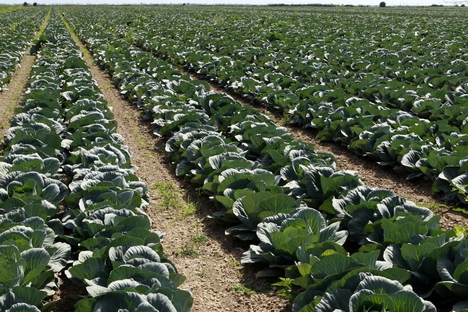 Overnight help
That said, there were a number of efforts ready to go to thwart any potential frost. “When there’s fruit out there like strawberries, they would have watered them last night,” says Riehm. “The water goes into the soil and warms up the ground. As it rises, it keeps the plants somewhat warm and helps protect them.”

At Guynn Family Produce Sales Inc. in Lakeland, Fl., Gary Guynn says that running overhead water to prevent frost or freeze also slows the ripening process down. “This week has been our least production week this season,” says Guynn, adding that part of the preparation for such a temperature drop includes double checking the pumps and sprinkler systems to ensure they’re ready to run all night. “That’s partly due to weather and partly waiting on the plants second hand of blooms to come in.”

Other efforts may have included helicopters. Neil Mazal of East Coast Farms & Vegetables in Lake Worth, Fl. also says that some growers may have flown helicopters above the crops themselves. “This would allow them to move the air and keep the frost from forming on the plants and keep the warmer air closer to the ground,” says Mazal.

Picking ahead
Some also were working on picking product in advance with an eye on the Mexican market and how that’s influenced what’s happening in Florida.

“Markets generally have been elevated,” says Mazal. “The Mexican growers have been in short supply after the flooding they had several weeks ago which has impacted availability out of Mexico. Florida plants in contemplation of Mexican supply. There’s been a very high priced market for most of the row crops, especially squash. Peppers are moving up now. It’s just because there’s no supply coming out of Mexico.”

Add to that the increasing shrinkage of available Florida farmland for production and it’s all made for some high price points on row crops for example. Mazal notes that zucchini and yellow squash are trading currently from $28-$30/box while generally at this time, they’re $10 market.

Would it pay off though?
Some growers may have already picked product in advance of last night’s temperatures although that’s a bit of a gamble, notes Mazal.

“Some folks will have gone and harvested early and pulled a lot of product for their coolers. And then they’re holding that product back off the market hoping there’s an uptick in price. And then they’ll release that product back into the market,” he says. However if there isn’t significant crop damage from last night’s temperatures, that product, which will have aged a few days, will need some expedited selling. “And they will reduce the price,” says Mazal. “It could backfire on them…but it’s also unlikely because the markets are elevated right now.”