One of Australia's leading produce markets is encouraging Australians to rally behind growers as bushfires and drought hit the industry, which will more than likely increase the cost of fresh produce.

Brisbane Markets receives produce from more than 7000 growers, with the persistent drought, and devastating bushfires in production areas across Australia - as well as road transport both within and between states has led to challenges. CEO Andrew Young told the The West End Magazine, that the cost of fruit and vegetables is likely to rise from the dual impacts of bushfire and drought.

"This is creating supply issues in relation to a range of products, including many vegetable lines, and unfortunately the impact could run over an extended period, particularly in relation to infrastructure and the damage caused to the likes of tree and vine orchards,” Mr Young said. “As supply volumes tighten, that was likely to be reflected in price increases for many product lines. Even with these challenges, the cost of eating fresh fruit and vegetables in Australia to support a healthy diet remains very reasonable. Growers are doing it tough, but the best way Australians can help these businesses – many of which have been run by families for generations – is to keep buying fresh fruit and vegetables even if they have to pay a little bit extra. With the on-going support of Australians, our growers will get through this challenging period just as they have overcome difficult times in the past."

One of the affected growers is Greg Mouat, from the New South Wales' Batlow region, who has an apple and cherry orchard. He told inews.co.uk lost two sheds, machinery, fences and netting used to protect his crops from birds. About a third of the trees were destroyed. It will take six years before a new crop can produce fruit, he said.

“It was a distressing sight. Dead cattle and sheep were lying everywhere," he reported, after returning to the town, three days after being ordered to evacuate. 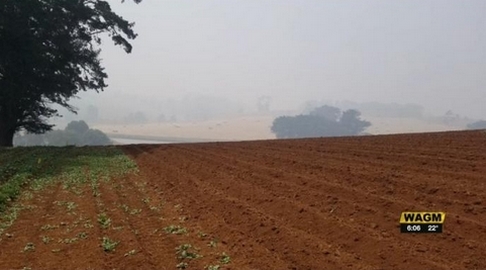 Further south, an American professor from the University of Maine, who is a specialist in potatoes, Steve Johnson is visiting Australia's growers. He told WAGM TV that he has never had to deal with major fire conditions that are threatening crops, especially on Kangaroo Island - one of the hardest hit by the fires.

"One of the problems with Kangaroo Island is it's also an early generation seed area," Mr Johnson said. "At least two growers have lost their entire crop. Their buildings exploded from the fire. Their machinery has been burned up. It's a total loss for them. The price of produce in the country's gonna go up because of that and the rest of the fires."

It is not just the produce growers, which are affected, but the towns and regions in bushfire areas, with visitor numbers down, leading to economic losses. In an attempt to counteract this, the Federal Government has announced a $76 million Federal bushfire recovery marketing package.

In a press release, Victoria Tourism Industry Council says the industry across Australia has experienced catastrophic downturn in business off the back of the unprecedented bushfires that have ravaged Northeast Victoria, the South Coast of NSW and Kangaroo Island. As a result, the industry met with the Federal Government over the past week and this recovery marketing package responds directly to calls from the tourism sector for immediate support to curtail the current crisis.

The $76 million package has five key components designed to reinvigorate the ailing industry, with a major focus on domestic and international marketing campaigns, a regional tourism and events fund and major investment in engaging international media and influencers to convey positive stories about the many areas of Australia that are untouched by this disaster.

“The $20 million investment in a domestic cooperative campaign is hugely important for our industry," VTIC Chief Executive Felicia Mariani said. "For most operators, domestic visitation is the largest proportion of their business and a significant spend to get Australians travelling again and visiting our regional areas is vital. We also know that regional events are major drawcards in attracting visitors and it’s great to see that the Government has included a $10 million allocation of funds to create and deliver events in regional areas that can kick-start our revitalisation.”

The package also includes $25 million for a global marketing campaign to stem the tide of cancellations from key overseas markets that are high as 40 per cent from some European source markets. There’s also a $16 million injection of funds to support international media hosting programs to counter the disastrous images that overseas markets have been seeing of Australia and supporting operators to attend the this year’s Australian Tourism Exchange (ATE).

As Australia counts the cost and recovers from last month's devastating bushfires, New Zealand growers are monitoring a Cyclone Tino, which is expected to strike Pacific Islands Fiji and Tonga. At this stage, there are only offshore warnings for high seas for New Zealand, but produce growers will be hoping it does not bring any high winds or torrential rain.

According to Newshub, The National Institute of Water and Atmospheric Research (NIWA) is forewarning that 'Cyclone Tino', could send peak waves, of 8m at its centre, against the eastern North Island next week. WeatherWatch also warns the most impacted areas will be the East Cape, Gisborne and Hawke's Bay.

"Many populated holiday beaches in the eastern North Island will also be affected by an increase in wave heights, wave frequency, rips and currents, such as the Bay of Plenty, eastern Coromandel and parts of Northland and Wairarapa," it says. "This offshore system may make for some surprisingly rough patches in some of our eastern beaches."