An abundance of limes coming into the U.S. from Mexico is making for a bit of an unsure market.

“Supplies of limes right now are coming in at a very high rate. A higher rate than was anticipated,” says Steven Leal with S&J Distributing in Edinburg, Texas. He notes that for the past three years at least, January has seen increased lime volumes come in from Mexico. “We’d anticipated some increased volume but this past Friday/Saturday, it was probably the most crossings I’ve seen on a Friday/Saturday in the last year.”

That said, what is coming across, and will continue to until likely the end of January, looks to be even sizing. “It’s quite balanced. Usually around this time we’re getting smaller fruit but right now it’s balanced. It’s an even share of established and new crop so there are optimal manifests right now,” says Leal.

Slower demand
Adding to the challenge though is somewhat lacklustre demand.

“Demand for the past two weeks has been fairly good but this week, it’s tapered off dramatically because of news of the abundance of fruit that showed up and is projected to show up this week,” says Leal. “Everyone’s sitting on their hands right now waiting to see what’s going to happen.” He also adds that the cooler weather currently doesn’t boost demand of limes either. 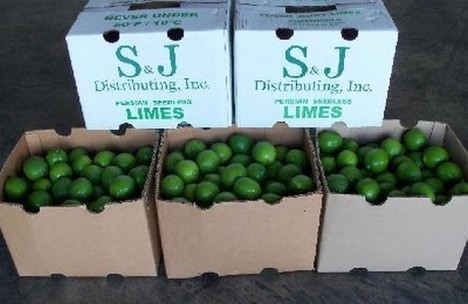 Along with Mexico, offshore lime imports are coming in from Colombia, Guatemala, the Dominican Republic and Peru. Brazil meanwhile is sending limes to Europe and Canada, a move that can affect the U.S. market at times. “But these countries tend to become a factor when the Mexican market is very expensive. They’re less of a factor when Mexico has an abundance of fruit and the market is down,” says Leal.

Price drop
So while signs are generally pointing to pricing coming off and continuing to do so until February, what that will look like is unknown. “We’re not sure if there’s going to be a sharp decline this week or not,” says Leal.

He adds that Mexico’s pricing is at a low point while the U.S. is higher. “Everyone caught wind of that and decided to pick and go. But once the supply has shifted dramatically, people are going to notice and the buyers will get savvy and withhold until it settles down,” says Leal.