The company will supply the European market for 17 consecutive weeks

HaciendasBio, the biggest organic fruit and vegetable producer in Spain and leader in the export of these products to Europe, mainly to Germany, will be the only one supplying organic asparagus to the market during the months of January, February and March. It is thus ahead of the usual harvesting season for this vegetable and will be able to offer the product from week 3 to 18. In the next four and a half months, it plans to produce 580,000 kilos of this vegetable, 35% of which will go to the German market, 15% to France and the rest will be divided between Switzerland, Belgium, the Netherlands and the United Kingdom, among other countries.

HaciendasBio obtains an early production of three types of asparagus: green, white and purple, thanks to strong investments carried out in the R&D area over the last 5 years. To be more specific, the company's efforts have mainly focused on the development of an innovative forcing technology in the farms that it owns in Extremadura and Almería which are devoted to this vegetable's production. This makes it possible for the asparagus to be ready precociously, while also adjusted to their natural rhythms.

The asparagus campaign has kicked off this past week with the green asparagus, which will close the season on week 18. The white and the purple asparagus will be available in the market from week 7 until weeks 18 and 16, respectively.

Key factors in early asparagus production
In addition to the research into new varieties and the development of revolutionary cultivation methods, always following the precepts of biodynamic agriculture, HaciendasBio has managed to extend the traditional asparagus harvesting season, which now lasts for 17 consecutive weeks thanks to the strategic location of its farms, which have climatological and orographic particularities that are favorable for the crop. The company has 54 hectares devoted to the production of asparagus distributed between two of its farms located in Extremadura: Rincón de Caya (green, white and purple asparagus) and Cantillana (white asparagus), and one of its farms in Almería: Pujaire (purple asparagus). 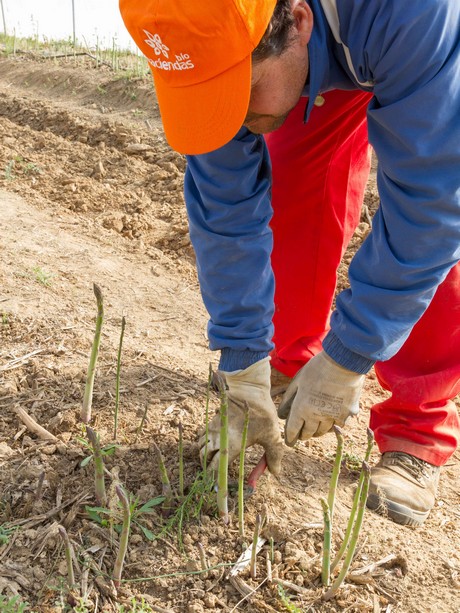 The asparagus of this Spanish producer are characterized by their soft and tender texture, as well as their intense flavor and superior sweetness. They reach higher Brix levels, since the plants grow slowly, adjusted to the natural rhythms. The harvest needs to be carried out with plenty of care; the company does it at times when it won't cause stress to the plant and the product is immediately cooled to avoid dehydration, processing it daily.

Purple asparagus
HaciendasBio also cultivates purple asparagus, a product with a certain aura of exclusivity, and which is highly appreciated by the most demanding consumers. It has an intense, fruity and much sweeter taste than white asparagus and is also characterized by a crunchy texture that makes it possible to eat it even raw.