The total global fruit trade market has grown by an average of 40% over the last ten years. It has increased from 45 million tons to 63 million tons. This growth has been gradual.

The increase in exports is keeping pace with the growth in worldwide fruit production. Global fruit production, in turn, is increasing at a faster rate than the world population. Currently, there is about 120kg of fruit available for each person in the world. 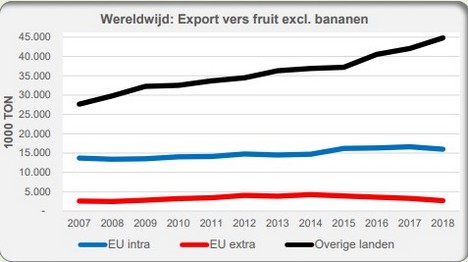 EU share keeps shrinking
European Union countries' share in exports in the worldwide fruit trade sector is gradually decreasing. EU trade is still growing. However, both exports and imports in the rest of the world are increasing at a faster rate. 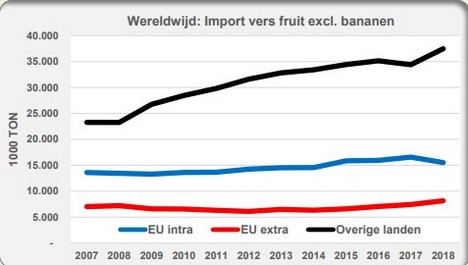 Most growth in Asia
The increase in the global fresh fruit trade is highest in Asia. Southeast Asian countries' exports and imports of fruit have almost doubled in the last ten years. These products exclude bananas. Western Asia is another region with a higher-than-average increase in fresh fruit exports.

The export performance in EU countries is weak. There was an increase. However, compared to the rest of the world, this growth is modest.

When it comes to fresh fruit (excluding bananas) imports, there is, as stated, significant growth in Asian countries. This increase is in both Southeast Asia and Western Asia. North American imports and those in the Gulf States, is increasing faster than average.

Imports in European countries are also on the rise. But, again, at a lower rate than the rest of the world. 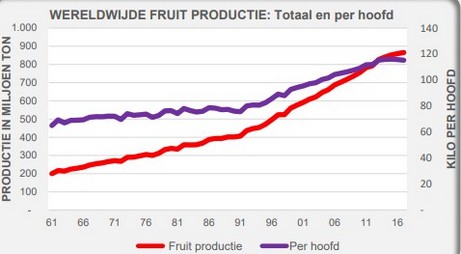 Latin American countries actually focus on exporting 85% of their fresh fruit to countries outside of their region. Again, this trade excludes bananas. Of this, only 30% goes to North America. More than a third is sent to the EU, and 12% is aimed at countries in Southeast Asia.

African countries' export of fresh fruit, excluding bananas, is mostly - 90% - aimed at countries outside the continent. Only 40% of this goes to the EU, while 18% is sent to Southeast Asia. The Gulf States get 15%.

Fruit exports from Oceania are now mostly aimed at Southeast Asia. New Zealand, in particular, exports this fruit. This region is followed, far behind, by North America, and only then the European Union countries. 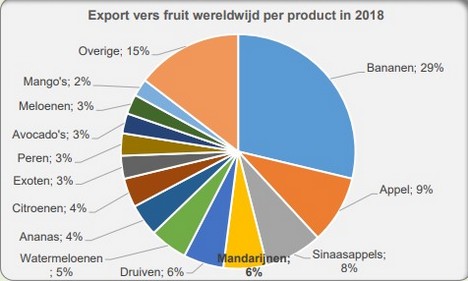 Bananas make up a third of the total
Bananas account for a considerable part of the global fruit trade. It makes up 30% of this sector. For this reason, research on this product was done separately for this article.

In ten years, the (net) export of bananas grew almost as fast as that of the remaining fresh fruit. Among the large countries, banana exports from Guatemala, in particular, showed a significant increase. There was also strong growth in the large net import countries. These countries are the United States, Russia, and China.

The German import of this product has been reasonably constant for the last decade. This also applies to the transit country of Belgium. The Netherlands is growing strongly as an importer, as well as a re-exporter of bananas. 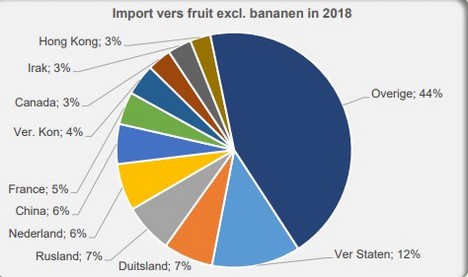 Slower increase in exports of other major products
As the most important product, bananas have fared well in recent years. The same cannot be said about the other four major fruit product groups. In comparison, global trade in apples, oranges, mandarins, and grapes did not fare as well. That is especially true for apples.

There is fluctuating worldwide trade of these products. This trade has, however, not increased in years. The word exports of several old, trusted fruits is also clearly lagging. These products include pineapples, pears, melons, and kiwis.

Grapefruit exports have even decreased. The are several significant growers in the global fruit assortment. These are watermelons, various exotic fruits, mangos, and, in particular, avocados. Ten years ago, only 700,000 tons of these were being traded globally. In 2018, this had already increased to 2,2 million tons. 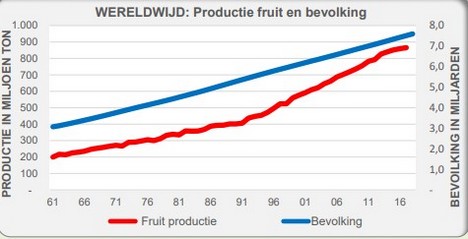 Mexico, Turkey, Vietnam, Thailand, and Peru are the big winners, but Spain is also up there
Several countries have benefited the most from this increased demand for fresh fruit. These are Mexico - avocados to the United States, and Vietnam, which exports mainly to China. Then there is Thailand, which sends exotic fruits to Vietnam and China and Peru - avocados and grapes to the Netherlands and the US.

Other countries have also benefited well from this growing global demand. These include Turkey, which exports citrus to Russia and Iraq, and Morocco - mandarins and watermelons to Russia and the EU. In absolute terms, Turkey has seen the most growth in exports over the past ten years. This has increased by 1,8 million tons.

Several traditional export countries have become less important. These include the Netherlands. Over ten years, this country's exports have only grown by 10%.

These include global exports. That is significantly lower than the average rate. In 2018, Dutch imports, as well as exports, were much higher than in 2017.

Spain is a globally significant exporter of fruit, excluding bananas. With an increase of 30% over ten years, this country is doing quite well when it comes to growth in exports. Other European Union countries did not fare nearly as well. These include Italy, France, and Belgium.

There are also several traditional South American fruit export countries. These are Chile, Argentina, Brazil. These countries also did not benefit from this global fresh fruit growth in trade. South Africa has been able to hold its own. Its exports increased at the same rate as that of the world market. 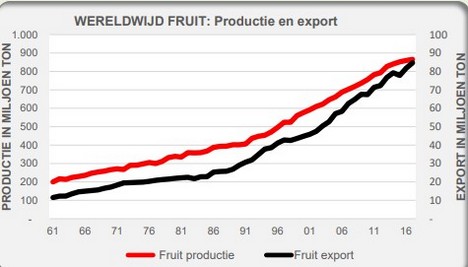 The US market is growing significantly
The most important distant global import market for fresh fruit is the United States. These exclude bananas. It is striking that these imports have increased dramatically. In ten years, it increased by 3,2 million tons. That is a growth of  77%. Mexico, in particular, has benefited from this. This country exports products such as avocados to the US.

Other growth markets are China/Hong Kong, Iraq, Saudi Arabia, and India. Imports in large EU countries are also increasing but lower-than-average rates. These countries include Germany, France, and the United Kingdom. The sizeable Russian market was growing strongly until the boycott was implemented in August 2014. After that, it shrunk at an even faster rate.