The Table Grape Working Group of the Produce Marketing Association (PMA) in Chile has made its analysis of the grape export estimate for the 2019-2020 season, prepared by iQonsulting and Uvanova, available to the entire industry.

This estimate is based on information from plantations of traditional and new varieties, new productions, as well as the plants' age by region and variety. The productive adjustments are based on the situation of water availability that affects the central zone of Chile. It also takes into account the losses caused by the frosts during the first week of October, which affected the sectors of the pre-mountain range of Aconcagua, the Metropolitan Region, and the valleys with a coastal influence of the VI Region.

Another aspect to note is that traditional varieties will decrease by around 7.8%.

The estimates by regions and varieties
The season began with an optimal supply of clusters, even in varieties that don't have high fertility, such as the Thompson S and Superior varieties, in all of the valleys. It should be noted that both the III and the IV regions have a normal supply of fruits and water, as most of the reservoirs in these regions will have no major inconveniences to supply water this season. However, some sectors of the IV Region that only depend on rivers may be affected. The most affected regions are the V and VI regions with a 3.5 and a 5.5% reduction, respectively.

The new varieties are yielding more volumes and a large part of these crops are found in regions that have no major water supply issues. This group of varieties will increase by 22% on average, so there will be just over 135,000 tons of export. Several varieties, such as the Timco, Sweet Celebration, Arra-15, and Allison, will stand out thanks to their increase in production.

The Red Globe, Crimson, and Thomson varieties will be the most affected and will suffer decreases that range between 15 and 30%, in the most extreme cases. This decreases will happen because the areas affected by the drought have decided to use their water in quality production. 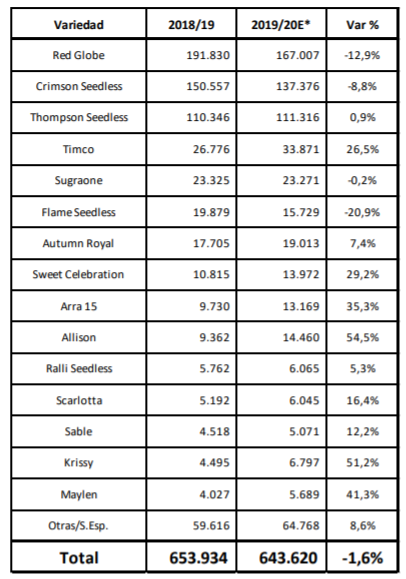 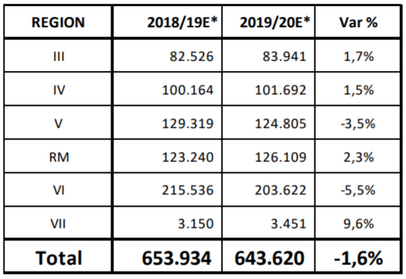