Today, every seventh apple in Switzerland is a club apple

With annual sales of approx. 60,000 tonnes, apples are among the most popular fruits in the Swiss retail trade. Club apples emerged as a production and marketing concept more than 20 years ago. Since then, these apples have been able to capture a stable market share of approx. 15 % of apple sales in the retail trade and, with more than 20 different variants on the market. So

far, none of these have been able to match the sales of the most popular classic varieties such as Gala, Braeburn or Golden Delicious. However, since club apples are more expensive than other varieties, they account for around one-fifth of retail apple sales.

Club apple as a production and marketing concept
At the end of the 90's, the so-called club apples or club varieties appeared among the apples. These are apples whose trade name is protected by trademark law. The club determines the production and marketing rules, for example how many apples are produced, how large they are and how they must look in colour or how the apples are packaged and advertised. Only producers who acquire a licence are allowed to sell these apple varieties under the brand name. The licence fee is used to finance the research and marketing of the corresponding club apples.

Club apples usually have advantageous properties for sale. For example, they look attractive in colour, turn brown less quickly or have a sought-after design. Due to their exclusivity and marketing effort, they are more expensive than classic varieties. Over the past three years, club apples have cost an average of CHF 4.43 per kilogram in the retail trade, 29 % more than the classic varieties Gala, Braeburn and Golden Delicious, which cost an average of CHF 3.44 per kilogram.

Today, every seventh apple is a club apple
Even while higher priced, club apples are proving their worth on the market and will account for CHF 40 million or 20 % of apple sales in the Swiss retail trade between November 2018 and October 2019. During this period, 9 168 tonnes of club apples were sold, equivalent to 15 % of all apples sold. Over the past three years, this share has remained fairly constant. The most popular are Jazz and Pink Lady The most popular club apples in the Swiss retail trade from November 2018 to October 2019 were 'Jazz' with 2,966 tonnes, closely followed by 'Pink Lady' with 2,871 tonnes. Other popular club apples are 'Diwa' (773 tonnes), 'Greenstar' (690 tonnes) and 'Kanzi' (494 tonnes). 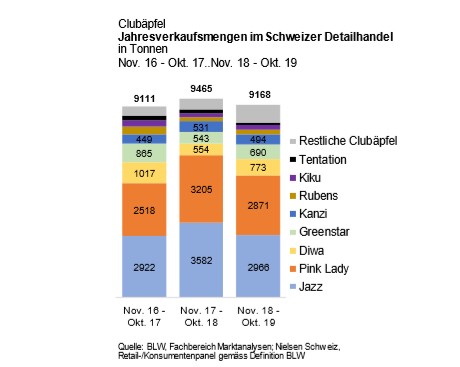 Area under cultivation rises to 19 percent
An analysis of the Swiss apple cultivation area shows that the area under apple varieties on which branded apples are based is constantly increasing. In 2019 alone, it grew by 6% year-on-year to 652 hectares. In contrast, the area under other apple varieties is declining. In 2019 it fell by 1% year-on-year to 2,792 hectares (cider apples, varieties with less than 40 ares and some apples not included in these figures). Club varieties were thus cultivated on 19 percent of the apple cultivation area in 2019. In 2015, this share was still 17 %. However, not all apples from these areas are marketed under the brand name, partly because not all meet club brand requirements.

The future will show whether the highly advertised club apples popular varieties such as Gala and Braeburn can compete with the market in the longer term. This also depends crucially on how many consumers are prepared to pay more for an apple positioned and marketed as a branded product.