The Christmas and New Year's Eve table grape campaign has already started and the warehouses are working at full capacity to complete the orders. In addition to grapes imported from the southern hemisphere, at this time there is still a supply of Spanish grapes, although torrential rains have taken a severe toll on crops in Alicante and Murcia, significantly reducing the production volumes. 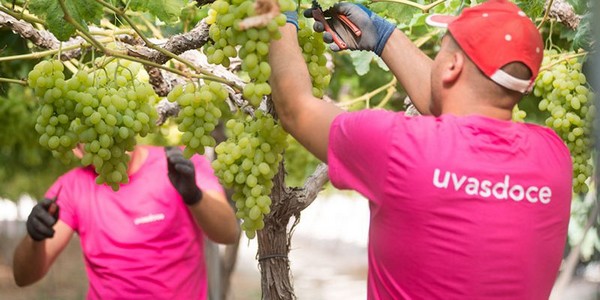 “This is the busiest time of the year in our facilities. For the New Year's Eve campaign, we have between 100 and 120 extra people working; something that is increasingly difficult to achieve, since it is hard to find workers, and in addition, salaries have increased by 20% this year,” says Miriam Cutillas, of the Commercial and Marketing Department of Uvasdoce.

“The campaign has so far been a difficult one. The rains recorded in September and December have caused us to lose up to 40% of our table grape production. Just after the storms, temperatures rose, which resulted in an excess of moisture that spoiled part of the production, between 1 and 1.5 million kilos.”

However, the most affected have been the producers of the seeded Aledo variety, which has also been hit by the sudden temperature changes, with very cold weeks combined with hot ones. “The price of domestic table grape prices is quite low, especially for grapes with seeds, whose average has fallen by between 15 and 20% compared to last year. The small businesses that focus on the production of grapes with seeds have been greatly affected by the rise in the minimum wage. Those who grow the traditional Aledo grape are having a really bad time. In our case, despite the difficulties, it will be possible to salvage the season, because around 90% of our production consists of seedless grapes, and these are better accepted, thereby allowing us to find more markets,” says Miriam Cutillas.

Uvasdoce is already receiving the first white seedless grapes from South Africa and Namibia. Meanwhile, it also continues to work with domestic Crimson red seedless grapes from their own fields. However, they will finish earlier than planned due to the impact of the rains. At this time of the year, the price of grapes always skyrockets, especially that of imported ones.

South Africa, England and Ireland remain the countries where this Alicante based company ships most of its seedless grapes, although the demand in the domestic market continues to grow year after year, according to Miriam.

As for Brexit, the producer and exporter says that the concern that there was at the beginning of the year is no longer there. “At the beginning, we were quite scared, but we ended up having a very good campaign in the United Kingdom in 2019. Two years ago, we decided not to expand anymore in this market, although we are growing slightly every year with our usual customers. Since we have other markets out there, we can't take a chance, given what can eventually happen.”