It employs a mass trapping technique with a trap filled with a hydrolysed protein attractant. The fruit flies are attracted to the bait, enters the trap and then drown in the protein hydrolysate.

CeraTrap® has no withholding period, there are no residues and it's 100% safe for workers, beneficial organisms and the environment.

CeraTrap® was developed by Bioibérica, a Spanish company, and is currently effectively used in more than 30 countries around the world. Further registrations on other crops and other fruit fly species will follow in South Africa. 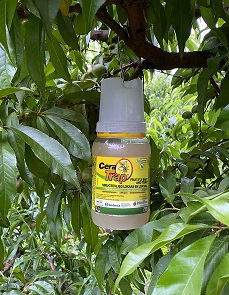 “The whole concept of mass trapping is very effective because it provides effective fruit fly control and can also be used for season-long suppression of the fruit fly population, therefore preventing the population to reach numbers that can make in-season control challenging,” explains Niel Kruger of InteliGro, a subsidiary company of the InteliChem group.

In terms of costs it’s very comparable to current fruit fly management techniques, he says. In the first year all the traps have to be hung out at a rate of 100 traps per hectare (higher density along the perimeter of orchards if there are additional hosts in the area), but thereafter only the bait is replaced, so costs come down in successive years.

The fluid is replaced, depending on environmental conditions and crops (canopy cover, for instance), for season-long control.

The Oriental fruit fly first appeared in the northeast of the country, but a single specimen was found in the Grabouw region a few years ago where it was eradicated, but the risk of distribution remains, particularly with weather conditions changing, Niel says.

Petru du Plessis, Western Cape stonefruit producer and consultant, says that a product like CeraTrap®, which he has tested for three years, is of great importance to South African fruit farmers. “There is pressure on fruit farmers to control fruit flies to a threshold of almost no catches and zero infestation. CeraTrap® works well by catching all detrimental fruit flies. In the process there are no chemicals on the fruit.”