The laser asparagus sorting system from Christiaens Agro Systems was launched on the market in 1996: although the sorting principle of the process remains roughly the same over 20 years later, the management of the Dutch machine supplier sees renewed interest in the tried and tested process.

"The user-friendliness, precise measuring technology and robustness of the system, together with relatively low investment costs compared to fully automated solutions, make our process an interesting alternative even today, especially for small to medium-sized asparagus suppliers," Angelique Christiaens told us during expoSE, Europe's leading trade fair for asparagus and soft fruits in Karlsruhe, where the company presented part of its machine catalogue. 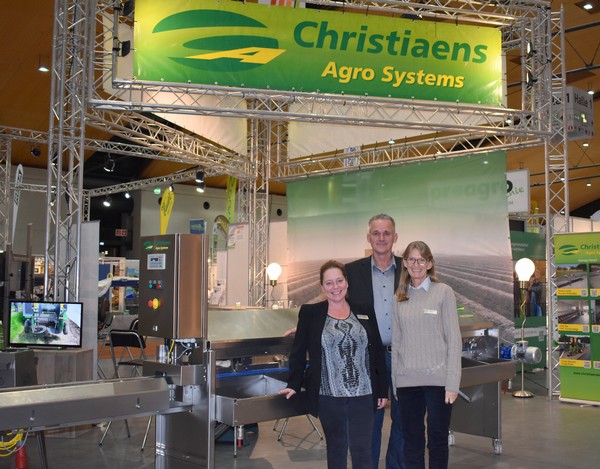 Representers of the company at the exhibition stand during this year's ExpoSE in Karlsruhe: Angelique Christiaens, Hans Kalter and Antoinette Aarts.

Renewed interest in a tried and tested system
The machine sorts white and green asparagus by thickness and length using the most accurate laser technology. First, the asparagus is washed and cut. Second class goods can be sorted out at the sorting section. An existing washing plant can be used. The thickness and length of the stems are measured very accurately on the sorting machine.

The machine is available in several versions, with containers, belts or both. In order to guarantee the highest possible capacity, the machine could be designed as a double laser system. "Although we have been offering the machine for more than 20 years, it has again been well received, not only by producers in Germany, but also in Italy, France and outside Europe," Ms Christiaens explained.

The laser sorting system guarantees the producer precise measuring technology for both green and white asparagus.

Improved asparagus harvester 'Chris'
In addition to the laser sorting process, the company also presented the new version of the existing Chris asparagus harvester, which has been optimized in some places. "Since the market launch, we have been able to make several major improvements," Ms Christiaens confirmed.

The chain or head of the harvester has been extended by 0.5 metres, making it easier to loosen heavier soils. In addition, the process has been equipped on both sides with a rapper adjustment, which can be adjusted depending on the soil type (softer or harder) for sieving capability. To increase speed and capacity, the hydraulic system has also been made more powerful and the film handling has been improved accordingly. 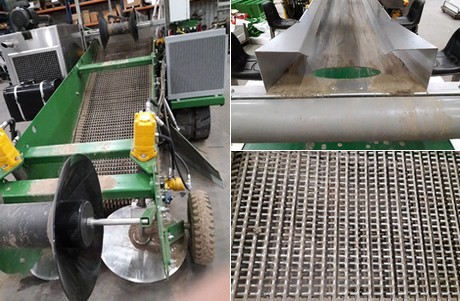 The Chris harvester has been optimized in some places since the market launch, so the capacity and speed of the process has been significantly increased.

In addition, there are new demands on diesel technology, which Chris also has to meet. This has led to a different diesel engine (newest type) with a soot filter. Christiaens Agro Systems BV wants to continue to support the asparagus sector with the improved harvesting process and the tried and tested harvesting and processing technology. "It is still our aim to provide both large farms and smaller farmers with competitive and efficient asparagus technology," said Christiaens.