Danish organics have been very much in demand abroad for a number of years now, but exports fell for the first time in 2018, reported national statistic keeper Danmarks Statistik.

The figures showed that Danish organic exports decreased by 46 million kroner between 2017 and 2018 and now account for just over 2.9 billion kroner of Danish exports. The good news is that the Danish Agriculture & Food Council predicts that organic exports are expected to increase again this year, as well as in 2020.

The lion’s share of the exports ends up in Europe. Germany is a particularly fervent importer, snapping up a 42 percent share, while Sweden (15 percent) and Asia (10) are other big markets.

Import exceeds export
It was said that Denmark was preparing for export pushes in Japan and France next year, and the council estimates that export will grow again to 3.5 billion kroner in 2020. Organic dairy products are still the most popular export products in Denmark, accounting for 1.2 billion kroner in 2018. 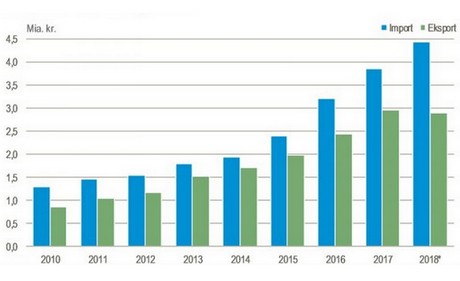