Only a couple of years ago the team with Agronom Berries, one of Poland’s biggest soft fruit growers, started growing strawberries hydroponically instead of in the open field. “We thought we'd better start learning since we believe that it would become a necessity within the next decade”, says Krzysztof Sak with Agronom Berries. “But the industry developed much more rapidly than we expected.” 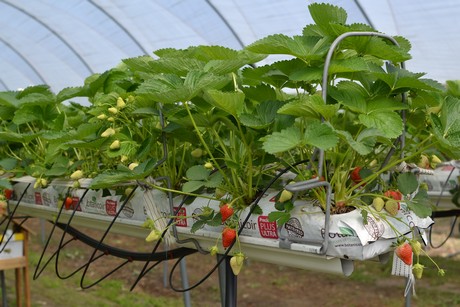 Agronom Berries is situated in eastern Poland, Lublin Province. Ever since the early nineties the company has been active in growing soft fruit. First mainly for the frozen market, but nowadays 99% of the company’s produce goes to the fresh market. “Poland was a big market for processed fruit. This is now slowly changing because the price for that type of produce is lowered thanks to new markets with lower costs, like Ukraine. It is the same as happened to Germany before, where growers moved into the fresh market years ago since Poland took over the processing market.” 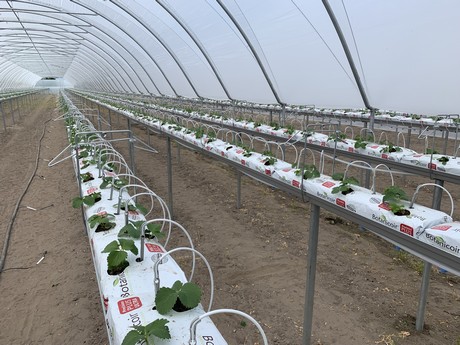 Growing for the fresh market demands the quality of the produce to be higher and of constant quality – something Agronom Berries takes their part in by investing in their cultivation methods. More and more crops are grown hydroponically inside multispan tunnels. Agronom Berries is the biggest supplier to the Polish supermarkets and also exports their products. They have a close relationship with these partners. “When we talk about harvesting next week, the supermarkets expect our harvest next week. They are dependent on our supply and need to be certain that we can deliver” 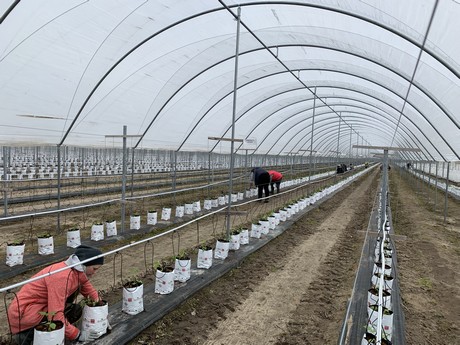 So here’s the remarkable part of the story. Even though the business of Agronom Berries is growing consistently, their cultivation acreage is not. The reason? Thanks to switching to hydroponic growth, their yields per meter are higher. “Yield goes up in substrate, so we’ll be growing on a smaller area. First we tried growing hydroponically with half a hectare strawberries, just to learn,” says Krzysztof. Now they grow in different ways. “Our way of growing depends on the cultivar,” says Krzysztof. “We currently grow raspberries only in tunnels in substrate. We don’t think that it’s possible to achieve good quality raspberries in open field. Our main reason for this is the fact that raspberries are a very soft fruit, so rain can do a lot of damage; in the tunnel this is not an issue. On top of that we have light, sandy soil here, which is not good for raspberries. In the tunnels there is also less chance at disease, a rainy climate can cause botrytis to take root in raspberry crops. Most importantly, in the tunnel we and our customer are sure that we can supply the fruit. I can’t call my client to say we can’t harvest, that would be the last conversation I have with that client.” 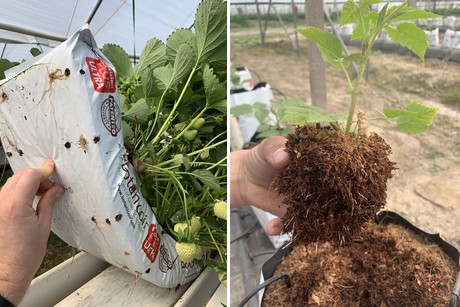 Coco
At Agronom all hydroponic growing is done in cocopeat substrate. “In the past we used the substrate for two years for the strawberries,” says Krzysztof. “Since we switched to BotanicoirPPU we want to try a third year with the same product. It is very good and even after two years with the current batch we don’t see much lower yield, so we decided to check for one more year. We will see how it goes. In general the substrate looks nice, the structure still looks like new.” 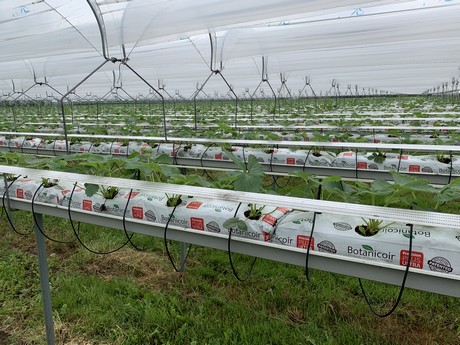 Strawberries
Strawberries are still grown in the open field, but slowly more and more of the strawberry production is shifting to substrate as well. According to Krzysztof the main problem that Agronom ran into with the growing of Strawberries in the open field was labour. “Labour is especially difficult when you combine it with the second problem: the weather,” he says. “Last year during June, harvest time, had very high temperatures. Because of the high temperatures all fruits, all varieties even, matured in the same period. In those situations it’s very difficult to find enough people to harvest all fruits on time. That’s why a few years ago we started growing in tunnels in substrate. Harvest is much faster and it’s easier for the picker. There’s no need to bend the knees when the produce is elevated on tables.”

“So each year we have less and less open field strawberries,” says Krzysztof. “From 80 hectares to 50 and now 40 and next season maybe we will go down to 25/30. This endeavor is quite a big investment, but we have no choice. Yield goes up in substrate, a smaller acreage is still economically viable because of the bigger yield, so we’ll be growing on a smaller area.”

At Agronom Berries they grow hydroponically inside multispan tunnels. Krzysztof says that they do not disinfect the substrate in between use. “I think in substrate production if you have good quality plant roots, then disease is not a problem,” he says. They use fertilizer and biological crop protection to keep the crops healthy during cultivation. 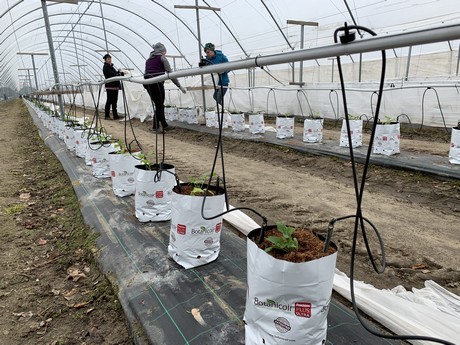 Labour
According to Krzysztof, Agronom Berries currently employs around 200 to 300 people. “For now that is enough,” he says. “But every year labour is becoming a bigger problem, and not just here - it’s a global problem. 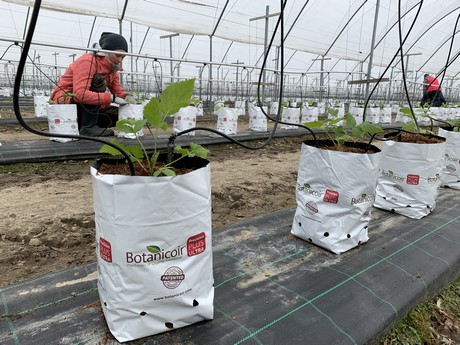 Blueberries
Besides being Krzysztof’s favorite fruit, blueberries are also the biggest crop of Agronom Berries production. “We have around 100 hectares of blueberries, he says. “In opposition to the other fruits these are still grown in open field, but that will change in the upcoming years. We want to shift because it allows us to harvest earlier and grow them for a longer period of time. It will be mostly the late varieties that will be grown in the tunnels. Specifically also because the late varieties are often subject to worse weather due to growing into autumn, when the weather takes a turn for the worse. More rain means more reason to put the produce under covers.” 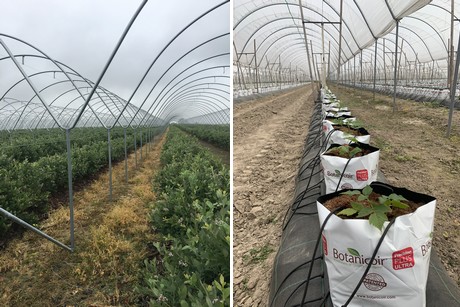 Supermarkets
For them the goal is to be able to supply Polish supermarkets year round – from spring until autumn, with fresh fruit. “Currently in the winter in Poland we still import fruit from Chile, Spain and Greece,” says Krzysztof. “Growing in Poland in the winter is much too expensive because heating costs are high. The temperatures can drop to -20 or -25 degrees, so it is hard to keep the greenhouses warm enough for cultivation without spending a lot of money on heating.” 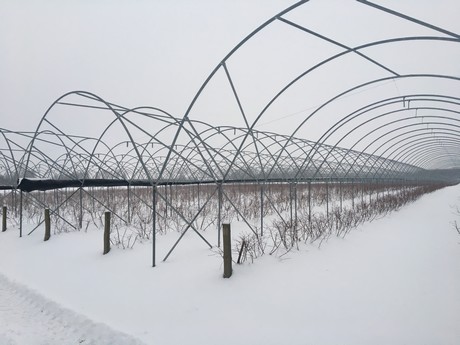 In Poland Agronom Berries sell directly to supermarkets, in other countries they sell via retailers. “There is a demand for constant production and consistent quality,” says Krzysztof. “This is quite different from two or three years ago. Back then Polish supermarkets were just looking for the lowest price, because people didn’t know berries. They thought berries were similar to apples or potatoes, that is now changing. Fresh high quality berries have moved from street vendors to supermarket shelves. The price is similar to other western countries, but so is the quality. The most important factors now are shelf life and that the produce looks good. The next important factor will probably become taste.” 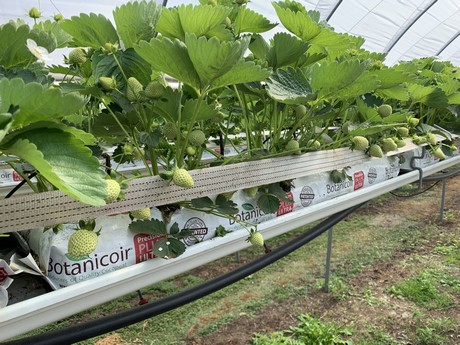 Agronom Berries delivers mostly to supermarkets, and they have a very direct relationship with these sellers. “When we talk about harvesting next week, the supermarkets expect our harvest next week. They are dependent on our supply and need to be certain that we can deliver. We are the biggest supplier to Polish supermarkets. Everybody wants to buy from us because we grow our own supplies and we can check the quality ourselves. So we can always deliver a high quality product.”