Rouses Markets hopes to build the largest-ever avocado display while trying to set a Guinness World Records title. The supermarket unveiled what they’re calling the “world’s largest avocado display” of an estimated 112,000 avocados at the Uptown Rouses location on Tchopitoulas Street.

A spokesperson says the fruit display took up to 20 hours to prep and build, using individual Hass Avocados from Mexico. This is Rouses’ second attempt at going for a Guinness World Records title; the first was the world’s largest artichoke display in 2012 with a whopping 20,000 artichokes.

The grand opening on Wednesday, Dec. 4 featured pork carnitas tacos, low-carb avocado toast and more for customers to try while the shop. A spokesperson said Avocados from Mexico will also give away coupons for avocado discounts on Wednesday. 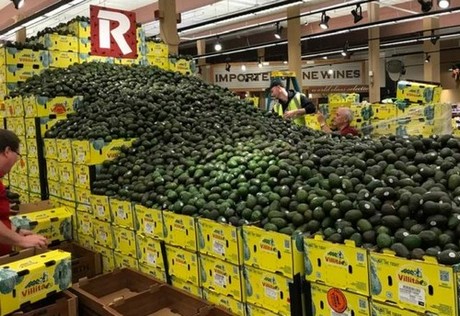 Along with the display, the chefs of Rouses are also offering live tutorials and food samples to try. They even have workers dressed up as avocados to take pictures of patrons in front of the massive display.

An article on nolaweekend.com says that for those who want to capture the display before the festivities are done; they will be handing out treats and hosting tutorials through Saturday.