Since the start of the harvest in July, this is the time of the year when the supply of sweet potatoes reaches its peak in Spain. Large stocks are currently in storage waiting to be sold across Europe taking advantage of the pre-Christmas increase in sales, although there is great competition from other origins.

“Since September, local productions have been hitting the shelves in a number of European countries where we also supply our sweet potatoes, such as France, Germany, the Netherlands and the United Kingdom. Now there is a supply both in Spain and in the rest of Europe, and it is at its highest levels,” says Francisco Rosillo, of the Granada-based company Frutos Los Pisaos. "More and more countries in Europe are cultivating sweet potatoes, and although their productions are not that large, this has an impact on our sales, since these countries will obviously choose their national productions first," he says.

This is a campaign with larger volumes compared to the previous year, when the crops were damaged by abundant rainfall in the main producing areas. “The quality has so far been great this year,” says Francisco Rosillo. Based in Granada and with its sweet potato plantations in Cádiz, Frutos Los Pisaos also produces and markets certified organic potatoes and vegetables such as kale, cabbage, Chinese cabbage, beet, artichoke, squash, red cabbage, cucumber, leek, fennel and pepper.

Besides Spain and Europe, the growth of sweet potato cultivation worldwide is very notable, according to Francisco Rosillo. “Europe is receiving sweet potatoes even from Australia, but also from South America and Africa. In February, the United States and Egypt become the main exporters shipping to Europe. Egypt is the main competitor in terms of prices and the US in terms of quality.” 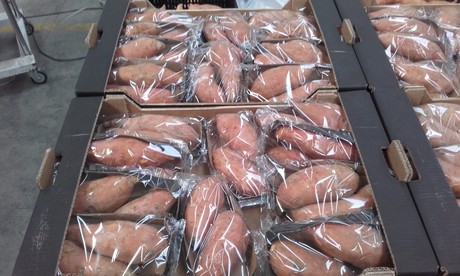 In spite of this, sweet potato consumption continues to grow significantly in Europe. “Fortunately, the product's rising consumption is allowing prices to remain stable, despite the increasing supply. At least this has been the case for most of the campaign. Also, there is still an interesting gap in the organic sweet potato market, where we could still make a difference, and where there is perhaps less competition and pressure from other origins,” says the producer and exporter.

“The demand is very high right now due to the upcoming Christmas celebrations. Sales tend to fall later, but after the last week of January they rebound again, since sweet potatoes are ideal for weight loss diets. Furthermore, there has been a great demand from the processing industry at the beginning of the campaign, mostly due to the abundant rains in Valencia, although the sector is well supplied at the moment,” says Francisco Rosillo.

Spain is still one of the markets with the lowest consumption of sweet potatoes. This is in deep contrast with Portugal, where consumption is about 5 times greater. Cádiz is the main producing area, although the crop has expanded to other areas, such as Granada, Seville, Valencia and Alicante, among others.