As the Spanish interior is one of the driest parts of Europe, in the regions of Almeria, Granada and Murcia, the desert silently creeps forward. This is the result of temperatures rising due to climate change. Fertile land is swallowed by soil erosion.

It is in this part of the Spanish plateau that Alvelal, an eco-business association, decided to experiment with a project that started five years ago and aims to reverse and even prevent land degradation. Through regenerative agriculture, which is based on the use of old farming techniques adapted to the modern needs and times, local farmers restore their lands' capacities.

The project is mainly funded by Commonwealth, a Dutch Non-Governmental Organization that has successfully carried out similar programs in South Africa and Australia. They are all part of a global effort to restore 350 million hectares of degraded land across the world.

Miguel Angel Gomez, Alvelal's regenerative agriculture coordinator and an agronomical engineer, says torrential rains exacerbate the problem, not only because they furrow the land but also because over-farming has further weakened the soil that has lost its absorbing abilities.  "We lose an average of 20 tons of fertile soil per hectare every year. About 1 mm of the whole surface and that's the most fertile layer of the soil. In farming, if we lose the soil, we lose everything.” 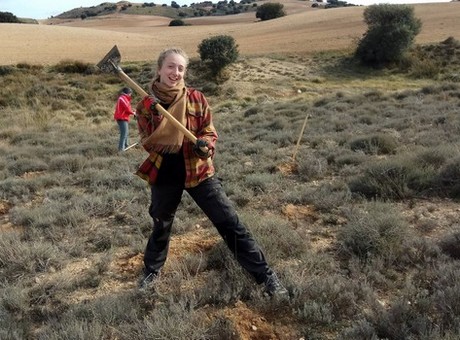 The organic content of the soil in Almeria and Granada's cultivated area ranges between 0.38 percent and 1.5 percent and falls short of the 1.5 percent level of organic matter common to dry lands, according to data from Almeria University.  That's what turned out to be the problem in Santiaga Sanchez's almond farm in Almeria and made her turn to regenerative agriculture.

An Alvelal member herself, Sanchez points to the rosemary and other aromatic plants she has planted across the border of her almond farm. She explains how they revive the landscape as Alvelal's idea of regenerative agriculture goes beyond eco-farming and on to landscape restoration.

Miguel Anglel Gomez says that along with grass and other species of leguminous plants in the farm that bring nitrogen back to the soil, the plants could even help fight climate change as they absorb carbon dioxide from the air. But there's more behind Alvelal's philosophy.