Italy must relaunch its pear sector during this negative year

International guests and an expert audience took part in the convention titled "Le prospettive commerciali e le nuove opportunità di mercato" (Business perspectives and new market opportunities) at FuturPera (Ferrara) held on 29th November 2019. In a negative year for Italian pear production, the discussion focused on the real economic perspectives for the sector, highlighting how the problems on a national level are also affecting main competitors such as Belgium and the Netherlands. 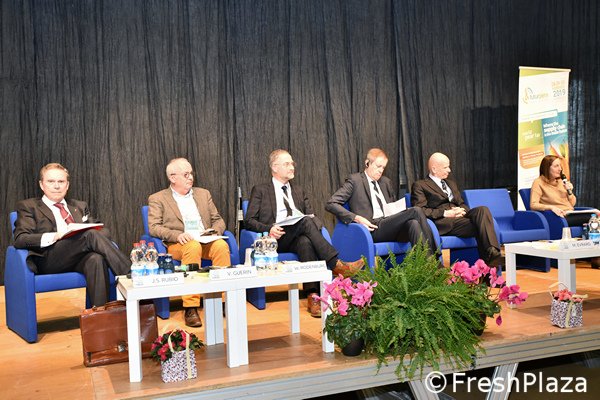 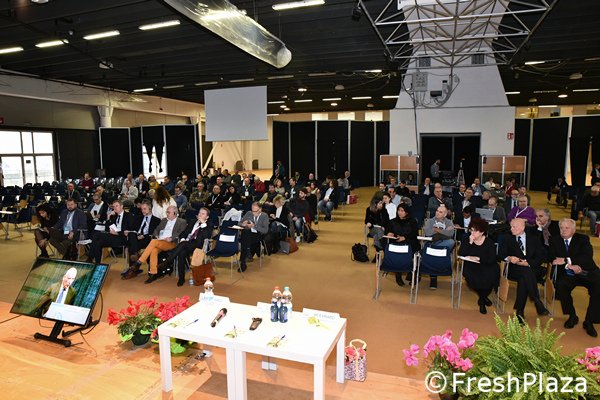 The convention was moderated by FreshPlaza director Rossella Gigli. OI Pera vicepresident Albano Bergami, illustrated what the segment priorities should be on an international level. 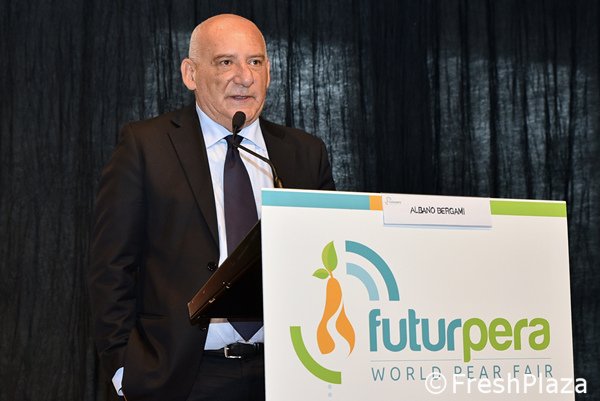 Albano Bergami: "We are sure the solution rests in an expansion of the foreign market, considering how much unexpressed potential there is on the domestic market or in aggregation. Why don't we work more as a team?"

After a video-message by MEP Paolo De Castro, the focus shifted on production and stocks within the EU. The data presented by Laura Stocchi (CSO Italy) reflected the situation emerged by the provisional estimates made by Prognosfruit 2019, integrating it with an update on the Italian situation. A first estimate talked about a 30% drop in production but, over the months, said drop reached a more dramatic 50%. 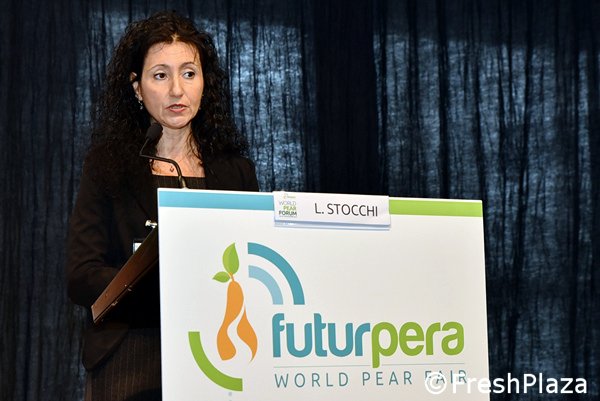 This has had a deep effect on European pear cultivation, as can be clearly seen in the chart below: the Italian share within the EU dropped to 19% while it had always exceeded 30% in the past. 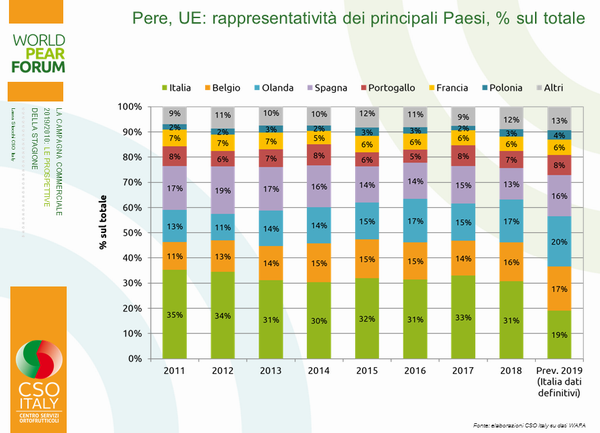 The main problem now is represented by stocks which, in early November 2019, are the same that would normally be reached in February (!). During the first round table, when leading sector representatives supplied further information, Opera general director Luca Granata stressed how the real challenge is to guarantee continuous supplies for as long as possible. He also highlighted how even the highest sales price cannot compensate for such a productive loss. 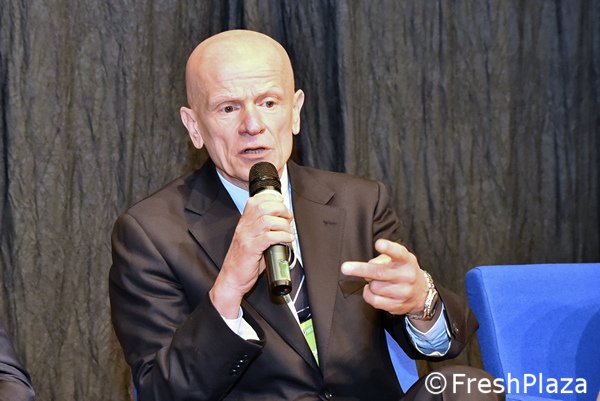 Not that quotations are particularly high at the moment. Representatives from Belgium (BFV organizer Marc Evrard) and the Netherlands (Wim Rodenburg from GoentenFruit Huis) reported in fact how demand for pears is not particularly lively due to the presence of competing seasonal fruit and to the heavy promotional pressure exerted by a few German chains. 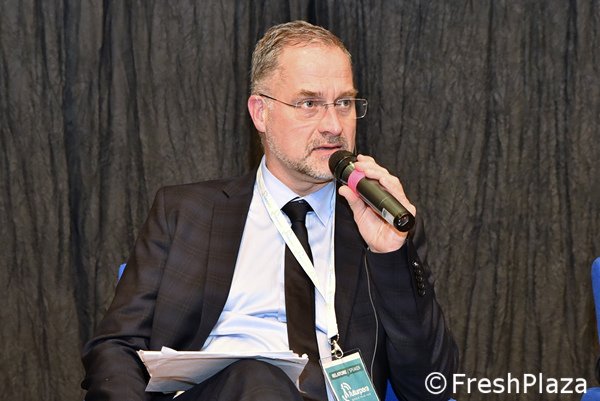 As for Belgium, the current pear production is the fifth most abundant ever, so there is plenty of produce available. It actually emerged how the fruit currently on the market already exceeds demand. 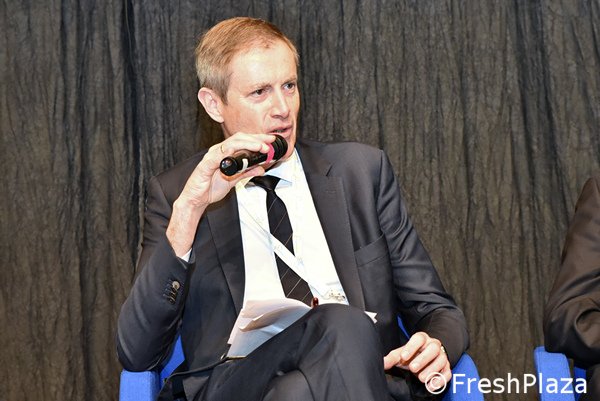 This in turn means that reducing production by a hefty 30% and focusing exclusively on the high-quality segment would be the only way to reach a price higher than 25 eurocents/kg thus guaranteeing a profit to producers. Yet crops and yields per hectare only seem to increase in a context where even new markets such as China are still unable to absorb enough volumes to compensate for the loss of the Russian market. 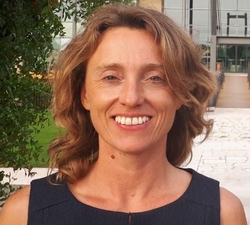 As consultant Anna Wiernicka (in the photo) explained to FreshPlaza, European pear suppliers must not underestimate Poland, which maintained its quality and quantities this year, meaning the harvest of Conference pears more than made up for the Italian lack of production (the Italian production of Conference pears in 2019 was 24,500 tons, i.e. 58% less than 2018. Poland produced 42,000 tons). Conference pears are the leading variety in Poland. The high quality is obtained thanks to the country's geographical position and is favored by the climate, absence of brown marmorated stink bug and cultivation method (integrated production).

Anna Wiernicka, who represents the Polish top fruit production for Italy, commented that, "during the convention, a few European pear prices were mentioned. Polish quotations are much more competitive, even including transport costs!"

The solution is therefore not to increase volumes. Vincent Guerin, manager of the economic affairs for ANPP (national french association for apples and pears), talked about the situation in France. Domestic consumers are increasingly preferring the local produce and, although France is not self-sufficient in terms of production, supermarket chains tend to favor domestic fruit, which therefore obtains profitable prices on the domestic market itself. In addition, although French volumes of club varieties (i.e. patented pears with distinct characteristics that can therefore make a profit for the entire chain) are around 10% of the total, new orchards in 2019 have been mainly (60%) destined to the production of these varieties. 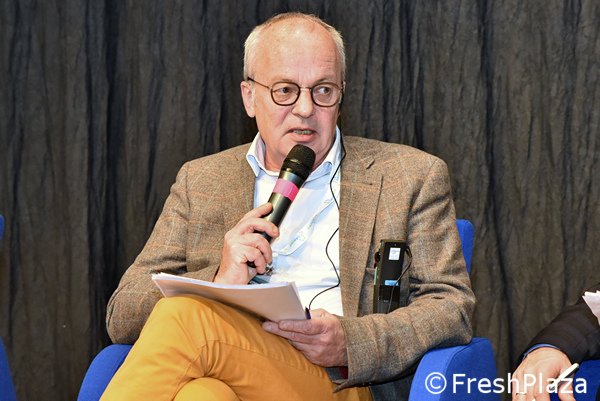 The leading producer region is Provence, where the main varieties are Guyut and William. Considerable quantities also come from the Rhone valley, Savoy, Loire and northern France. William and Guyot represent 45% of the total, while Conference and Decana reach 30%.

Joan Serentill Rubio (president of the top fruit segment at Fepex and Afrucat, the main Spanish fruit association) presented the case of Spain. The typical national pear Blanquilla is in crisis with a drastic reduction (-28%) in cultivated areas and volumes harvested. In addition, the success of other products such as summer fruit meant there is now not enough space in warehouses for pears. In this country, 80% of pear orchards is located in the north and half of them is of the Conference variety. 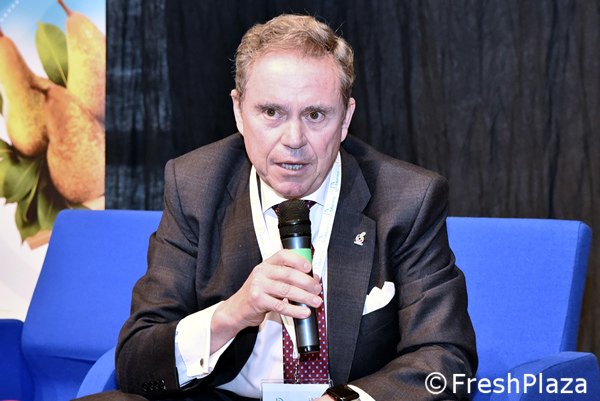 Understanding consumers
What are the factors that must be kept into consideration to make the pear industry economically viable in the future?

When it comes to the Italian market, one of the crucial elements is to analyze how pears are perceived by consumers. After a short introduction by CSO Italy director Elisa Macchi, prof. Stefano Massaglia from the University of Turin tried to answer this question by illustrating the results of a research done in collaboration with CSO. 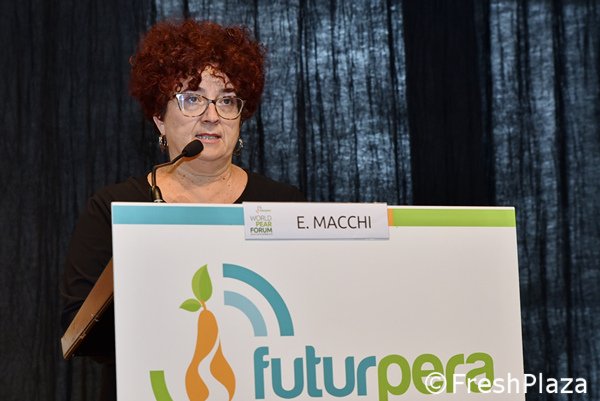 Elisa Macchi: "We now know who purchases pears in Italy, where and how many they buy. What we need is to understand is how to stimulate consumption. The research was only performed on a limited sample and is still being developed, but we think we have already identified a few prominent elements."

"Only 8% of interviewees never eat pears. 30% eats them rarely (i.e. less than once a year), proof of how this fruit is still relatively unknown. 7% eats them often and 16% regularly (once a week). There is room for improvement, also because consumers are mostly over 45." 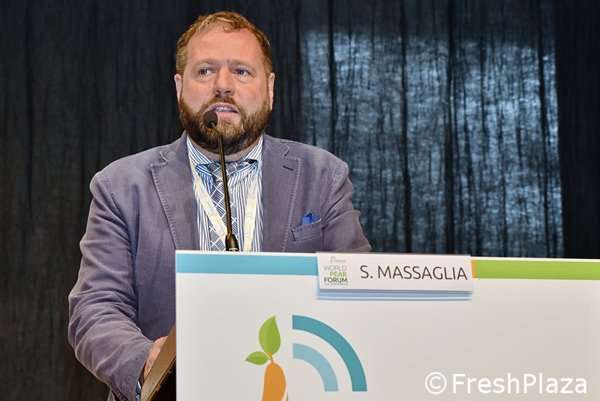 When making a purchase, only 27% of interviewees identifies a mark, while many confuse marks, PGIs and single varieties. Among those who do eat them, pears are perceived as a tasty, seasonal and Italian fruit. However, 30% ignores the fact that Italy is the leading European producer.

As for prices, they do not seem to be a big obstacle. For example, only 4% of occasional buyers reports buying few pears because of their price. The reasons they do not buy them are their preference for other fruits, the fact they do not find ripe enough fruits (20%) and the fact they are impractical to eat (10%). 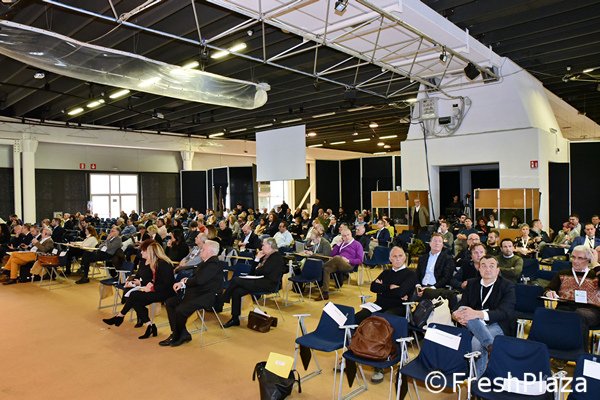 "Medium grades are the favorite and 40% only eats them peeled. What is more, only 25% eats them outside home. This means the H&R sector should be taken in more consideration to increase sales. Consumers do not consider pears as snacks, but they would eat them if they found them convenient and quick."

Understanding the product
What if there were other things we still do not know as regards the nutritional virtues of pears? Another research carried out by prof. Maria Gabriella Marchetti from the University of Ferrara and supported by OI Pera analyzed the health aspects of the product, which can be categorized as a functional food.

The research on the interaction between food and human DNA is opening up new theories regarding the role food plays in enabling our genetic code to express some of its functions. Anti-oxidant substances such as polyphenols, for example, play an essential role in countering the effects of free radicals. However, the research showed how the bioaccessibility of an anti-oxidant substance is more important than the actual percentage of it found in a specific food. This in turn means that said substance can have a beneficial effect only if our organism can metabolize it.

When analyzing the polyphenols contained in an Abate pear, researchers considered how they were absorbed by the intestinal epithelium. It emerged that the degree of absorption varies depending on the time of day (circadian rhythm of cortisol). In the morning, the intestinal epithelium absorbs some polyphenols more than others (so eating a pear for breakfast has a neuroprotective effect) while, in the evening, it absorbs another kind of polyphenols (eating a pear in the evening improves the metabolism of fats).

The day said research can become a true "claim" aimed directly at consumers, i.e. found in labels illustrating the beneficial aspects of a fruit, the entire sector would benefit from it. 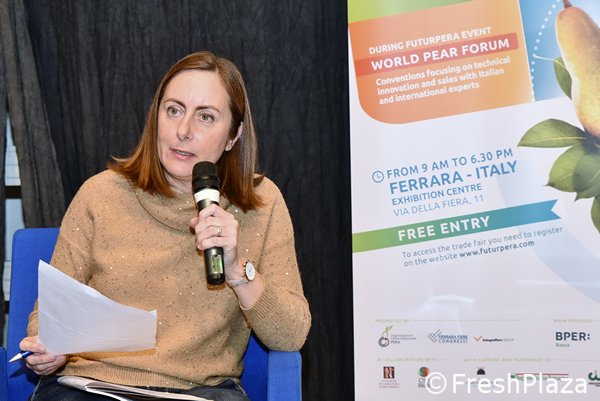 Final testimonies from Italy
The second round table further analyzed a few topics not previously analyzed. 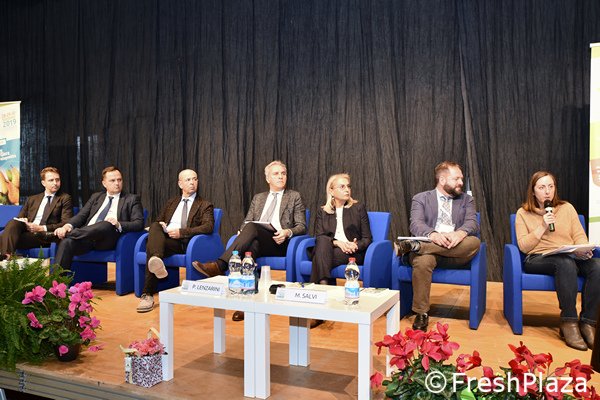 Ilenio Bastoni, director of Apofruit, stressed how the organic pear segment is profitable when it comes to both the fresh produce and processing industry sectors. 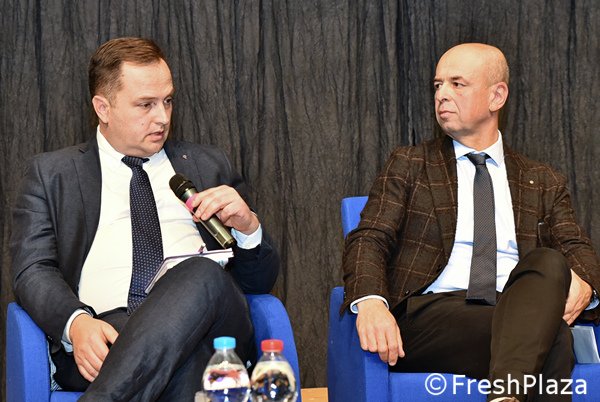 Fruitimprese president Marco Salvi talked about the weakness of the Italian system as it keeps losing export shares, so much so that 2019 will be the year when imports will be equal to or exceed exports. Companies play an essential role in suggesting and supporting political choices e.g. the opening of dossiers towards new markets. 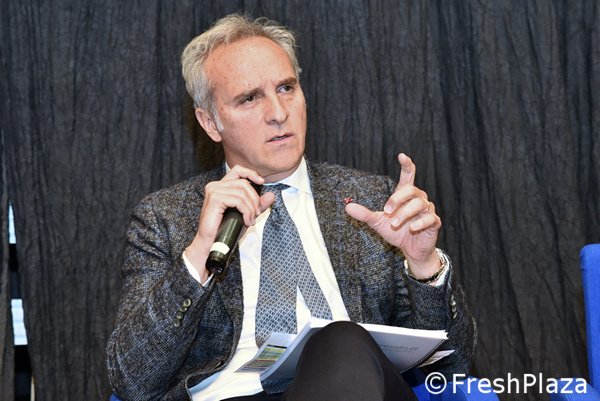 Piergiorgio Lenzarini, president of Consorzio Pera dell'Emilia Romagna Igp stressed the essential role of marks and distinctive productions. Some chains promote PGI products, while others ignore them preferring their own brands. 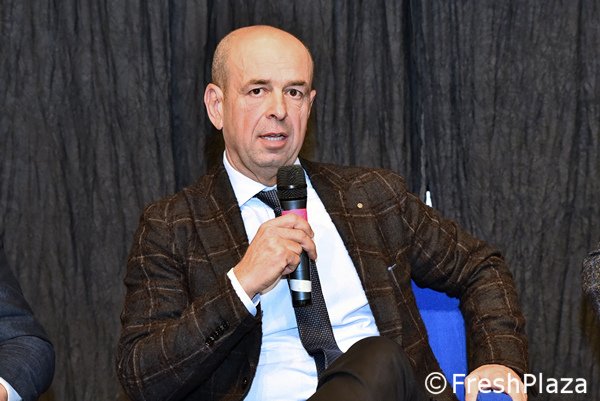 Luigi Mazzoni (in the photo below), CEO of a group located in Ferrara, highlighted the vulnerability of a sector that hit the minimum production level in 2019. 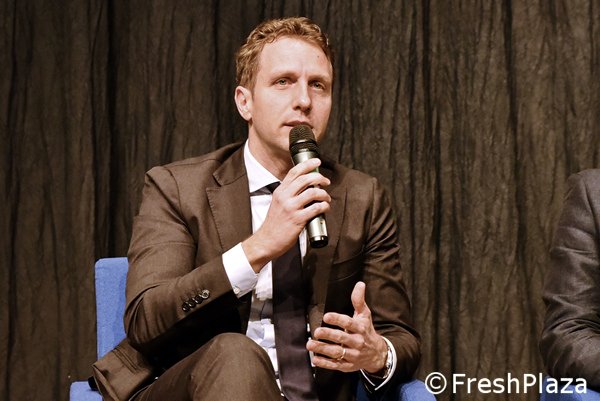 According to Mazzoni, widening the range of countries Italy exports to is important, but it is not enough. At the same time, the manager was positive about the future thanks to the "qualities" of the Italian product which are finally recognized by the market.