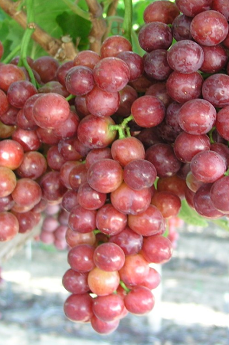 The crop from the Orange River region is lighter on early cultivars. Grape weight is slightly lower than originally thought, but size certainly looks better than last year, to the relief of grape growers.

“It’s not been a difficult start to our harvest in the Orange River, it’s gone well, it’s just that it looked better initially until we got three consecutive days of 45°C and 46°C which forced us to pick everything really quickly before it affects shelf life, and there was more sorting required in the packhouse and some losses, particularly on the Flame. The heatwave did affect our packouts to an extent.”

One Orange River producer estimates the decrease at around 20% on early varieties.

The South African Weather Service has confirmed that it reached 50°C at Vioolsdrif, on the border between South Africa and Namibia, last Thursday - an unverified new weather record for South Africa. (The border town is not far from Aussenkehr on the Namibian side and approximately 400km from Kakamas on the Orange River.)

The situation is not homogenous across the production region, as FreshPlaza is similarly also told of great firmness and shelf life of grapes coming from this area this season.

More XL grapes available
“Grape size contributes to heavier bunches and better yield,” says a grape exporter from the Orange River region. “So far we’ve packed below 10% regular size whereas last year this time we already had over 40% regular size. There are definitely more XL grapes than last year.”

A trader at another company, who also wishes to remain anonymous, confirms that his growers have been reporting more XL than last year. He also notes that UK and European retail don’t give the kind of premium for an XL grape that the Far East would. Exports to the Far East have just kicked off for South African grapes.

One trader says that the start of their Far Eastern trade is later this year because grapes from the northern areas (Limpopo/Mpumalanga) were affected by climate. “Even if the vineyards are covered by plastic, like everyone does in the north where they have summer rainfall, the soil still remains wet and the atmosphere is humid and this season we’ve seen a high incidence of burst berries.”

Europe looks good but there are some reservations
The pre-Christmas market is less crowded than last year and looks very promising at this stage.

The decrease in available volumes could have a positive effect on prices in Europe, but, one grape trader says, despite lower stock levels there are retailers who have not adapted their price levels.

Another notes that prices are still strong but promotions to move volumes could cause downward pressure.

“Season is an improvement on last year in all respects”
From this week more red grapes like Tawny and Flame will be packed in the area, as well as Prime, Arra15, Sugraone, Thompson starting this week.

The Olifants River region has started packing (some heatwave damage reported there too) and the Berg and Hex River regions are expected on their usual schedule.

It’s looking like a good crop in the Boland, some downy mildew after unseasonal rain in October, but overall prospects are positive.

Reports that the industry will reach the high end of the first official crop estimate, 67.8 million 4.5kg equivalent cartons, are premature and, according to a number of traders to whom FreshPlaza spoke, probably unrealisable.

“This year’s definitely an improvement on the past two seasons in all respects,” says a Northern Cape grape trader.