There is quite a buzz of activity in the grape market, notes Robert van Melle of Origin Fruit Direct. The overseas grape season started this autumn with Brazilian grapes, but according to the importer they are under increasing pressure due the Italian and Spanish new varieties being available for longer. "These take over the market share from the Brazilians. The European grapes are cheaper, so if you can continue with good quality European grapes, the choice is easily made. But it is already well into November by the time the overseas season starts. "

"The Brazilian exporters anticipated this by sending fewer grapes, also with last year in mind when prices were low for a long time. Peru also had a bad season last year, but unlike last it has the United States as a market. There are not expected to be large volumes coming from Peru to Europe, although shipping was started earlier this year and there have been arrivals of Peruvian grapes for a few weeks. The market is pretty good and prices are rising at the moment," says Robert. 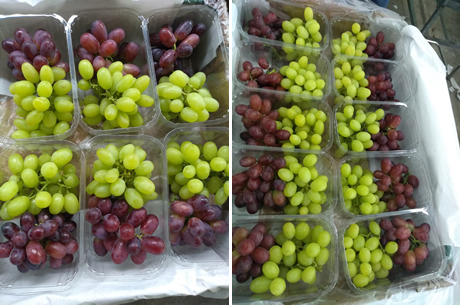 "At the same time, we see that a German discounter has closed a program with several importers concerning a substantial volume of Brazilian, Peruvian, Namibian and South African grapes at prices that cannot be earned in any way. This causes a lot of unrest in the market because fellow retailers refer to this program, which is bad for sales because the price level could have been higher if there had not been this pressure," notes Robert. "The market is not at all there and there is a brake on sales at the moment. In recent years, Germany has been the front-runner as a good grape market, this year it seems that the cards have been dealt differently."

The Namibian grape growers have now started picking the grapes and they are also starting up in the South African Orange River. Especially with the white, seedless varieties, the weight per cluster is a lot lower, so the volumes will turn out lower than people initially thought, "Robert expects. "Of course everyone would like to participate in the historically good pre-Christmas sales, but we don't have the volumes of white available that we had hoped for. I expect good prices because of this and I also think that the decline from week 52 will be less than usual. Red grapes are also not excessive, but more available. "

Looking a little further ahead, the start of the India season will also be later, Robert says. "Because of the Monsoon, the harvest will start two to three weeks later. Normally large volumes arrive from week 7, this season will not arrived before week 10. That will undoubtedly lead to a shortage of white seedless grapes from mid-February to early March. Although South Africa has switched to the Hex River, many Thompsons and Sugraones have been replaced by newer red varieties there. All in all, it could be an interesting market! "