As stone fruit begins to hit the domestic markets, growers in New Zealand's Hawke's Bay region are still counting the cost of a major hailstorm that caused pockets of severe damage to fruit and crops in early October.

Hawke's Bay supplies the majority of the New Zealand apricot, peach, nectarine and plum crop, and peak industry body Summerfruit NZ says it is sold largely to the local market with the first crops starting in mid-November and running through to March.

"The hailstorm hit Hawke's Bay on 1 October at the tail end of flowering," Summerfruit NZ chief executive Marie Dawkins said. "The impact has been significant. Hail is very fickle, hitting some areas hard while bypassing the neighbouring property. The impact on Hawke's Bay growers is both emotional and financial. Most growers are stoic but as an industry we are keeping an eye on each other. The Rural Support Trust offered their services at the post-hail meeting that Summerfruit NZ organised." 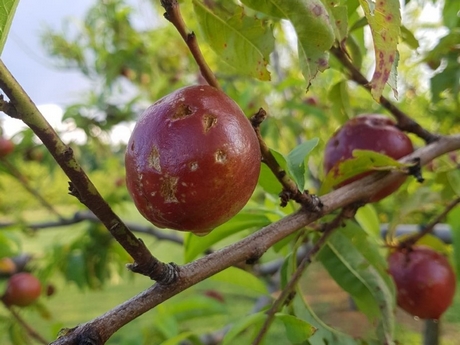 Ms Dawkins suggested that as supply from this area will be down, price should be up, but says that will be for the market to decide, ultimately. South Island fruit starts in November with the harvest of Marlborough cherries with other summerfruit coming online in January, so it is hoped that there is not too much disruption to supply.

"Nectarines have started and are in the market place now, with apricots about to start," grower and Summerfruit NZ vice chairman Roger Brownlie said. "Peaches and plums arrive at the end of November. The worst of the damage has been managed through thinning. A grade system provides specs for growers and packers to follow. We expect very little, if any impact on export, as very little summerfruit is exported from Hawke's Bay. The majority of the export fruit comes from Central Otago." 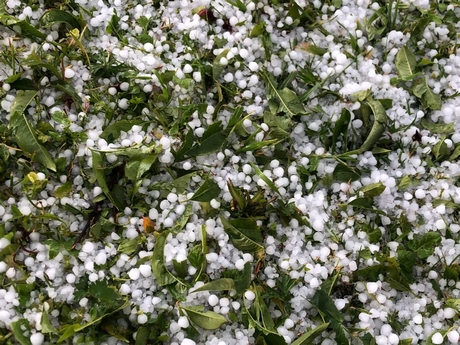 The hail came at time when the fruit was very small, and Summerfruit NZ has been watching the development of the damage. Initially leaves were seen with holes torn in them which affects tree health, and with appropriate treatments most have grown away again after a period of wondering what had happened.

"In the harder hit trees there is damage to new growth and last season's wood," Mr Brownlie said. "Some of these branches will now break when the fruit grows large, and the result of this will carry over to next season. Again, appropriate treatment has kept trees healthy. Fruit damage ranges from a blemish, to a small spot, to many small spots that have not changed the shape of the fruit. Other fruit, where the impact was deeper, are starting to show significant distortion small scallops as the fruit is growing around the damage."

Mr Brownlie says hand thinning has removed the worst of the damage, but it can still be found. Growers are on the lookout for negative impacts of damaged fruit with an increased focus on the control of brown rot.

"The worst affected trees depend on location and how advanced the tree phenology was" Mr Brownlie said. "As mentioned earlier, cherry is later to bloom, Mayglo nectarines are very early and the rest somewhere in between. In this instance late-blooming varieties have an advantage! Peaches with the fuzzy skin initially appeared to escape the worst of the early damage, but this is not the case as the fruit matured. The Golden Queen peach crop, which largely goes for processing, seems mostly unaffected due to a later bloom." 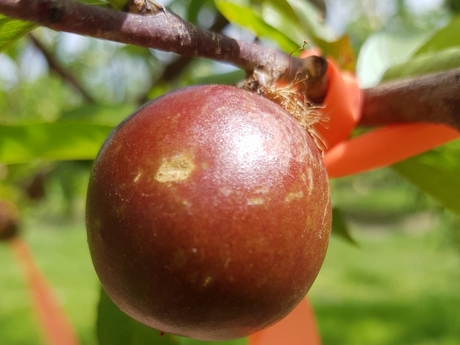 Summerfruit NZ is advising affected growers of the need to make smart decisions based on numbers and measurements and they should continue to talk with their advisors, bank managers and accountants to help alleviate some pain and mitigate the effects.

"Experience has shown that it can take a season or two to recover from a weather event of this nature" Ms Dawkins said. "At the same time all growers know that this is part of fruit growing. This isn’t the first, or last, weather event that growers will have to deal with. Though that does not make it any easier to lose a crop that you’ve invested so much into, so close to harvest."

Here's a summary of the damage to the different stone fruit varieties:

Cherries
Seven weeks after the hailstorm and the effects are variable depending on location and crop type. Those growers with cherries are 10 days into picking early cherries and have generally good crops of clean fruit. Much of the cherry plantings in Hawke's Bay are under bird exclusion nets which mitigated the worst of the hail damage. As a result, when combined with later flowering than the other summerfruit types, some good heat units and not much recent rain, cherries are looking pretty good.

Apricots
The early apricots are due to begin harvest possibly this weekend. One of the areas more severely impacted by the hail is also where a significant proportion of the apricots are grown. Trees that we’ve seen have a lighter, than normal crop even after lots of hand thinning of damaged fruit. However there is still some fruit to be picked. That said, a proportion of this fruit still has hail markings. Hail being capricious, some growers could have 30% of a standard crop of class 1 fruit while the neighbour around the corner has 70% of a class 1 fruit. The Royal Rosa apricots being eaten now are pretty clean blemish-wise and have a good mild apricot flavour.

Nectarines
The earliest of the nectarines have been picking for close to two weeks. There are not many growers of Mayglo anymore, with some carrying a full crop of largely unaffected nectarines and some with a crop close to a complete write off. We will begin to get a clearer story early in December when the main varieties start harvest, and expect the results to be variable, but in general not a complete write off for most.

Peaches and plums will have a similar story to nectarines, variable but with some work, a moderate crop load for most growers, but not all.