Given the increasing economic value of domesticated apples with over 83 million tonnes harvested worldwide, novel cultivars continue to be bred, such as red fleshed apples created by crossing wild-red fleshed apples with domesticated varieties. Large red-fleshed apples are now available, but they suffer from an increased incidence in enzymatic browning. A study published on Frontiers in Plant Science have demonstrated the link between the elevation of anthocyanin-related transcription factors and an undesirable fruit disorder. The accelerated advancement of maturity via premature ethylene induction has implications for the breeding of high quality novel red-fleshed cultivars. 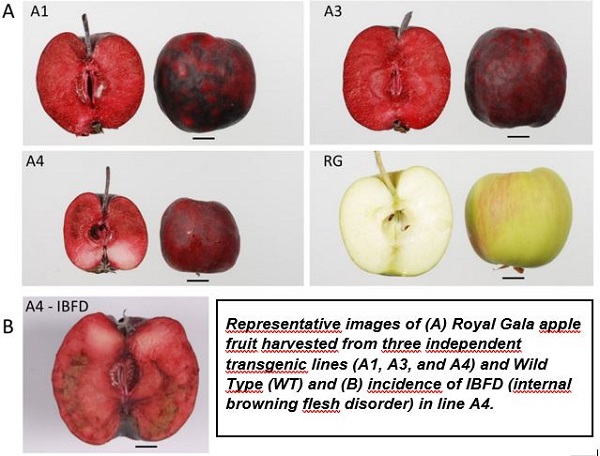 The elevation of anthocyanin contents in fruits and vegetables is a breeding target for many crops. In some fruit, such as tomato, higher anthocyanin concentrations enhance storage and shelf life. In contrast, highly anthocyanic red-fleshed apples have an increased incidence of internal browning flesh disorder (IBFD).

"We saw no incidence of IBFD in WT Royal Gala but the over-expression of MYB10 in the same genetic background resulted in a high rate of IBDF. We assessed concentrations of potential substrates for IBDF and a comparison of metabolites in these apples showed that anthocyanins, chlorogenic acid, pro-cyanidins, flavon-3-ols, and quercetin were all higher in the MYB10 lines - The scientists explain - Internal ethylene concentrations were measured throughout fruit development and were significantly higher in 35S:MYB10 lines, and ethylene was detected at an earlier developmental stage pre-harvest. Expression analysis of key genes associated with ethylene biosynthesis (aminocyclopropane-1-carboxylic acid synthase and oxidase; ACS and ACO) and polyphenol oxidase (PPO) showed the potential for increased ethylene production and the mechanism for enhanced PPO-mediated browning. The expression of a transcription factor of the ethylene response factor (ERF) class, ERF106, was elevated in red flesh. Analysis of transcriptional activation by MYB10 showed that this transcription factor could activate the expression of apple ACS, ACO, and ERF106 genes".