According to an article on cnbc.com, climate change is posing an existential threat to the precarious lives of farmers across the country. More intense and frequent weather disasters are wiping out entire harvests, and warmer winters are exposing crops to severe frost damage.

For apples, a warm spell in the winter will force trees to flower prematurely and expose the buds to unpredictable winter frosts, hail and other extreme weather. In some cases, entire trees can become stressed and die.

Experienced fruit growers like Elizabeth Ryan from the Hudson Valley region of New York, are now experimenting with more resilient crops, growing tactics and technology to cope with warmer winters and unprecedented heat, rain and drought. But climate change has become an impossible financial burden for many farmers.

The Hudson Valley has a long and robust history of apple growing. New York is the second-largest apple producer in the U.S, and about 22% of the state’s annual apple production is derived from the Valley. But the apple-lush region is under serious pressure. In the past 50 years, the Valley has experienced a 71% increase in heavy rains, with unpredictable downpours and flooding.

Ryan, who operates several orchards in the Hudson Valley, has experienced three major crop losses due to bad weather in the last decade. 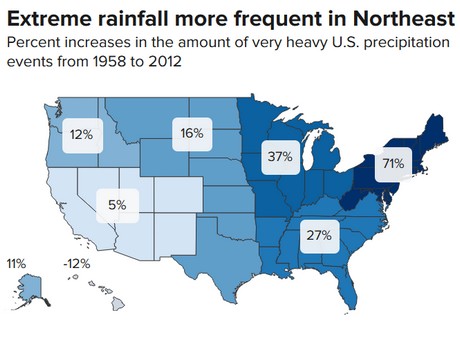 In 2012, apples in New York bloomed about a month earlier than usual when temperatures rose up to 70 degrees in February and then dropped back down. Half of the state’s apple crop was destroyed and farmers endured millions of dollars in losses.

It’s a significant economic problem, as apple production in the Northeast U.S. is valued at more than $400 million. Unless farmers can find ways to grow more resilient apple varieties, or implement technology to combat severe weather, scientists warn that fruit-growing regions in the U.S. will continue to be ravaged.