"I no longer want to grow in acreage but in quality"

Seventeen years ago, Turkish-Dutch businessman Zoef Yilmaz began growing radishes in the Netherlands. Meanwhile, the company's radish production area has grown to 20 hectares, however greater growth volumes isn't important for the producer. "What difference does it make if you have 20 or 40 hectares of radish? I don't want to grow in hectares anymore; but in quality. The lower quality of the Dutch radish in the winter months has bothered me for years, but fortunately, we have lighting that gives us a solution for that." 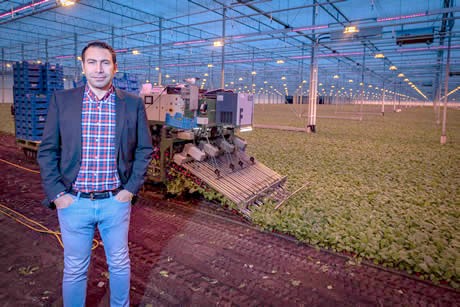 Succesful test
Yilmaz Radijs has used LED and hybrid lighting for the last two seasons, being the first radish grower to work with a large scale hybrid installation .

Without lighting, it takes an average of 11 to 12 weeks before the radish can be harvested. It is expected that with hybrid lighting this will be reduced to 6 or 7 weeks.  Selected were Agrolux assimilation fixtures and Philips Greenpower LED Toplighting modules, installed by Stolze. Yilmaz is the first radish nursery in the Netherlands with hybrid lighting on a large scale.

"The test was successful. The lighting increases the quality, flavour and shelf life of the radishes. Unfortunately, it is very difficult to cover lighting costs, due to the current, high energy prices. This is a pity, because from a quality point of view, we want to focus on six to nine months, then we have a uniform; high quality product; all year round."

Market pressure
Each week, Yilmaz produces an average of 90 tons of loose radishes and 180,000 bunches of radishes for customers in England, the Netherlands, Denmark, Germany, Sweden and Belgium. “The demand for radishes is currently good. The market was under more pressure in the second quarter, because there was a lot of supply from the Netherlands and other parts of Europe. It was a shame, because normally the most important months for us are between March and July, representing 60% of our turnover. Fortunately, we had a good third quarter, ”says Zoef.

In addition; according to the producer, it is an advantage that the weather is becoming increasingly extreme. "Given the fluctuating climatic conditions recorded in Southern Europe during this season, I anticipate that supermarkets will increasingly opt for the supply certainty of radishes from Dutch greenhouses. But we too must take into account the more extreme weather. In December 2018 for example, was a very dark period and this year we had extremely dark weather in October."

Other innovations
In addition to lighting, the radish producer is currently busy with other innovations. For example, he was the first producer of radishes in the Netherlands to obtain the PlanetProof certification, he hopes to be able to present his new packaging as an alternative to plastic in the near future and is busy with the testing of new varieties of radishes. "Quality, shelf life and taste are paramount in all options. Fortunately, in recent years we have seen that supermarkets are looking for a radish of distinctive quality and this is exactly what we can offer throughout the year."