This season the larger harvest was caused by the increased area for consumption potatoes in the big 5 with 9 % compared with the 5 years average. This year overall average yields are estimated at 43.9 to/ha which is 6.8 % under the 5 years average, however around 3 tons more than last season.

For Great Britain where the harvest is always later, no estimations are available yet and the 5 years average was used however this will likely be close to reality. In Great Britain 70 % of consumption potatoes are harvested. The final figures for the 2019 NEPG crop will be published at the end of November. 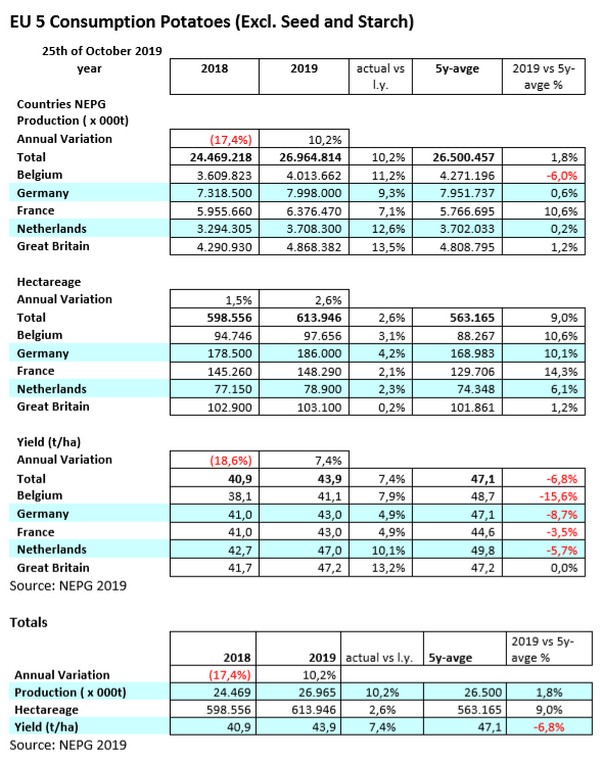 Harvest late and not finished yet
This year’s harvest is later than usual. During September all available irrigation systems were running as it was too dry and in October it was too wet to harvest. Especially in Belgium and The Netherlands still almost 60 % had to be harvested last weekend. However, since several days the harvest could restart again and under normal circumstances the harvest will be brought into the stores safely by the
growers.

The quality is fine however extra attention and monitoring is needed during storage season as many potatoes entered the stores in wet conditions. Some rots (bacteria and fungi) have been reported and good ventilation and drying is needed.

There has been a continuing export to Poland and other South-Eastern and Southern European countries during the last weeks and the movement is continuing. All tonnes gone are tonnes which won’t be available for the EU-05 market. The processors started their demand early this season. The price level has an upward trend since about 2 or 3 weeks, and for the future all depending on final harvests and the quality during storage. 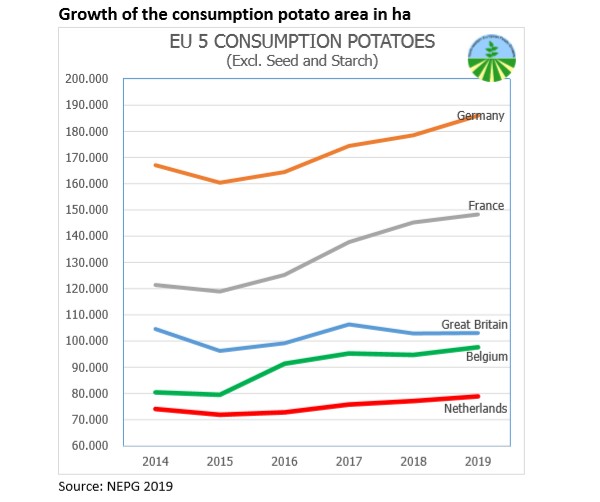 Potato area
Overall the NEPG remarks that on the mainland production costs went up and will continue to increase in the coming years, due to more irrigation, more harvesting costs, for the potatoes harvested in wet conditions and especially higher storage costs. This due to the higher  costs for alternatives to CIPC and for cleaning the storages. Reportedly, this is the same for Great Britain also. This context must be considered on the mainland for the contracts that will be signed for the next campaign. The NEPG advices not to increase, on the mainland, the next years area anymore. “If we have a normal harvest with this existing area, the market will not be in balance anymore,” according to the Secretary of the NEPG.