Red kiwifruit grown in California is now in season. Suppliers are in the process of shipping out the early fruit. However, it's only going to be a short season - about three weeks - as growers and shippers alike try out the market and gauge the fruit's acceptance.

"We have just received our first shipments of Red kiwi," said Cole Firman of Coosemans LA Shipping. "These Red kiwifruit are grown in the Central Valley of California, around the Reedley area. Because it is so new, we are in a testing phase so growers have set aside some of their existing kiwi fields to grow Red kiwi and trial it."

Berry flavor?
Firman and his team were fortunate enough to have a taste test of the early fruit as it arrived on their dock the first day. He described the appearance and the taste, noticing that while still having the characteristics of regular kiwifruit, they also exhibit a berry-like flavor.

"Before cutting them open my first thoughts were they looked like Gold kiwi, slightly on the large side," he said. "They were on the greener side so it's good for shipping, a solid piece of fruit. Cutting in, it looks like a kiwi and tastes like a raspberry. Red Kiwi still has that familiar kiwi flavor in the background, but definitely has twisted berry notes that pop out at you. It was surprising." 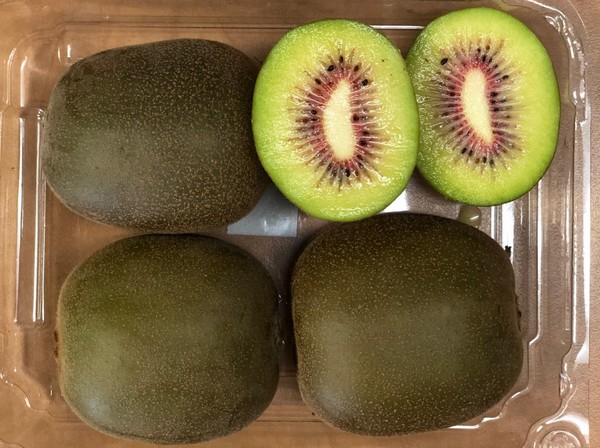 Plenty of potential
It wasn't long ago that Gold kiwifruit made its first appearance in the US market. At the time, it was considered very exotic, but through small steps, it has carved out a position in stores. Firman said that being involved with products where growers are willing to invest and test new flavors is exciting and rewarding.

"We are in a wave of new flavors," he observed. "Gold kiwi is still relatively new, and my team remembers when Gold kiwi accounted for only a small percentage of kiwifruit sales. The growth has been tremendous along with Baby kiwi."

The focus now is what happens when Red kiwi hits the market and what the level of interest from consumers will be. "There are still many consumers that are not familiar with it," Firman noted. "There is a good level of interest in these first shipments, but the telling statistic will come from repurchase orders. We have received calls from all over the country so we are shipping our Red kiwi nationwide."

Coosemans is shipping Red kiwifruit in 8x1lb clamshell packs. "Red kiwi is a premium piece of fruit," Firman concluded. "We shall see how the markets respond. I can't wait to see it evolve in future years."