Most European countries have a reasonable production, with Poland as a major exception, as the volumes there have dropped by no less than 40%. For their part, China, South Africa and the United States are all happy with the current season and satisfied with their volumes. There is some uncertainty regarding exports. The Indian boycott on Chinese apples has been in place for almost two years, and the Russian embargo is still having an impact on the global market. According to exporters from various countries, Brexit has so far changed little when it comes to exports to the United Kingdom. 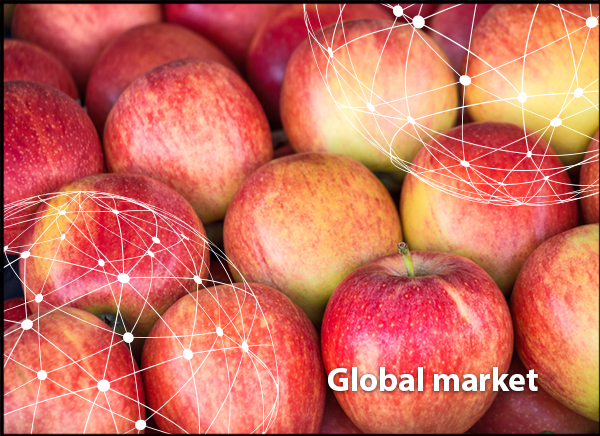 The Netherlands: Good sales, but no remarkable volumes
Apple prices in the Netherlands are stable for the time of the year. Whereas in other years prices have fallen sharply after the campaign's opening sales, this hasn't been the case this season. In the end, good volumes have been harvested. The apples of the latest harvest haven't completed the coloring process, but all in all, the quality is looking a lot better than last year.

A top fruit trader said that it is important for growers to remain willing to sell in order to prevent market stagnation. In the Netherlands, apple sales are increasingly focused on the domestic market. Retailers prefer signed agreements and are no longer interested in suppliers who can exceptionally offer them cheap fruit. Traders believe that the requirements of retailers have become extreme. Class I batches are often no longer enough for supermarkets. The product should look almost perfect, and that will certainly become more difficult towards the end of the season.

As regards exports, Germany is purchasing a stable volume; the United Kingdom too, despite the uncertainty caused by the Brexit situation, and Scandinavian purchases have been slightly more important than in previous years. An exporter denounced the nationalist approach in markets such as Germany, with distribution centers from the Ruhr region taking apples from the Bodensee region, but skipping the Dutch ones.

Germany: Undersized harvest, various long-term investments
In Germany, almost all cultivation areas report a moderate to slightly below average harvest; nevertheless, a sufficient volume from the domestic harvest is still available. The German Elstar, Jonagold and Boskoop dominate the supply, which is complemented by the Tenroy, Braeburn and Cox Orange. The Kanzi and the first Jonagored from the country's own harvest can also count on a good demand. Some smaller volumes from the Netherlands, Italy, France and overseas are also traded.

There are some interesting developments underway in the German growing areas. Firstly, the organic acreage is steadily expanding, in particular on Lake Constance and the northern German growing area of Altes Land. The Colina and Deljonca varieties in particular, but also the relatively new Natyra, are gradually gaining ground. The Wellant apple is on the rise in conventional cultivation, particularly in northern Germany. "Given the rising demand, this apple is currently being planted on a large scale in Altes Land, near Hamburg. In terms of price, this apple represents the perfect balance between the most popular varieties, such as the Elstar, and the club apples," said a Northern German wholesaler.

Austria: Harvest is going well, with smaller sizes
In Austria, the sector is not dissatisfied with the harvest so far. Due to the cold spring and the subsequent heat wave, the size of the apples is predominantly below average for each variety. This also applies to the Gala (the main variety), with a current average diameter of 65-70 mm.

Sales in the wholesale market are still going as expected. The price of the Gala has increased from 0.61 Euro / kg to 0.64 Euro / kg and is therefore almost at the same level as last year. The Golden Delicious has become 19% more expensive compared to last month and reached the highest price level in eight months (0.57 Euro / kg). The Kronprinz Rudolf has recorded a 9% increase compared to last year's price. The Idared and Jonagold, however, have been sold for relatively cheap prices in order to keep sales going.

Agrarmarkt Austria currently reports a total of 10,900 tons of apples for storage (organic + conventional). Two thirds of these are Jonagold, Golden Delicious and Idared, with the latter expected to be completely sold out before the new harvest arrives.

France: Good market for organic and export
The conventional apple market is quiet in France. There is still a lot of fruit from the third harvest available, which is resulting in a more aggressive supply. The picture is more positive on the organic market. There is good dynamism since the start of the season, and this market is still growing. French apples are also booming in the field of exports. There is good demand from both Asia and Europe. Importers from the United Kingdom don't yet appear to care much about Brexit and still guarantee a stable market.

Italy: Average harvest
The most important growing area for apples is the Val di Non area (Trentino / Alto Adige region). The plantations there are located 200 to 1,000 meters above sea level. The harvest for the 2019/2020 season is average, although some growers are experiencing a slight decrease (10-15%). Thanks to the temperature differences between day and night, the Fuji variety has a perfect color. The Melinda Consortium, one of the most important and best-known brands, is trying to make its range stand out by introducing new varieties. A few days ago, the brand presented six new red-skinned apples. One of these also has red flesh. The names of the new varieties are SweeTango, Tessa, Gradisca, Morgana, Galant, Isaaq and UEB6581.

Poland: Low volumes and high prices
Due to the frost in May, the Polish production volume is falling by 40%. The Idared, Ligol and Jonagored varieties were the most severely affected by this. In the meantime, the demand has remained the same and this is leading to higher prices. Polish apples are just as expensive as the Italian ones at the moment, so now it all comes down to quality. In this regard, Italy is still better, but according to a grower, this could change within a few years. Poland exports a lot of apples to Egypt and India. Together, these countries fill the gap left by the Russian embargo.

US: Large supply
The harvest in the US seems bigger than last year's, although there are considerable differences between the varieties. The domestic demand for apples is growing and the supply comes mostly from the retail. Exports are also starting to get going, particularly to South and Central America, Asia and the Pacific Rim. The total quantities at the latter destination are somewhat lower than normal. It is important for exports to get off to a good start. If not, the market may have to deal with some oversupply. Given the high volumes, prices are lower than at this time last year.

China: Limited volume of quality apples
The new apple season has started in China. This year, there is a big harvest, but the quality of the apples is not always good. Thus, the volume of quality apples is limited. The price is expected to remain low this year, given the large volume. Last year, the price was very high because the harvest was badly damaged and the supply was limited. This year, things are looking very different.

In terms of exports, a lot is shipped to Southeast Asia. Normally, shipments also go to Europe and the US, but due to last year's high prices, very few have done it this time. Exporters hope that the conditions will be better this year, as the prices will be a lot lower. The Indian government's ban on the import of Chinese apples has now been in place for almost two years. Many exporters hope that it will be lifted soon, as India used to be an important export market for China. In addition to India, Russia has also banned the import of Chinese apples this year.

South Africa: Positive outlook
It is still early in the season; the blossom period has just ended on the Cape, but things are already looking promising in a number of areas. In other places, it is a bit drier, but in general, the weather conditions on the Southwest Cape are fine.

Next week, growers will have to deal with the "November drop" phenomenon, during which part of the apples will fall from the tree. Only then can a good estimate of the total harvest be made.

The first South African apples are harvested in December in the northern province of Limpopo. Those are followed by the apples from the eastern part of the Free State province. The prices are expected to be good. In South Africa, the apples currently consumed have been coming from storage for a few months, but these volumes only represent a fraction of what is produced in the Cape.

Australia: India is a potential market
The Australian apple sector sees a lot of potential in India. It is a large country that is developing economically. Partly thanks to the growing demand for quality products, India could become an interesting market in the coming five years. Apple and Pear Australia Ltd (APAL) recently visited the country and found opportunities to export branded apples. Varieties such as the BRAVO™ and Pink Lady® could be very successful here.

After achieving success in the US, the Cosmic Crisp® apple is now also being launched in Australia. This is happening thanks to an exclusive agreement between Red Rich Fruits and Proprietary Variety Management. The Pink Lady dominates the market, with a 41% share, followed by the Gala (23%) and the Granny Smith (18%).